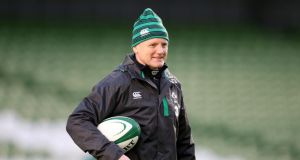 With George North, or more particularly Wales, in the dock over concussion; Irish head coach Joe Schmidt says the earliest hooker Rory Best will be allowed to train this week is Thursday. That day is entirely dependent on the Irish hooker passing a series of Head Injury Assessments (HIAs).

English head coach Stuart Lancaster was so impressed by his Six Nations’ captain Chris Robshaw’s display of leadership against Cardiff at the weekend that he is ready to name him as his World Cup captain. Prior to the game, Robshaw refused to be pressurised into leading his team from the tunnel to the pitch before Wales had left their dressing room.

Steven Gerrard may have stated his keenness for Liverpool to sort out Raheem Sterling’s contract, and Brendan Rodgers agrees, but he has given the player’s advisors some, advice.

He says Liverpool will not be held to ransom over a new contract and fears an excessive salary could jeopardise the young player’s future.

The man largely responsible for any penalty rule change in the first instance - such was the velocity of his strikes, Cork captain Anthony Nash has expressed disappointment that the recent penalty trial in hurling won’t extend into the league.

The reinterpretation of the rule by Central Council last year, insisted that penalties be struck from the 20-metre line.

In the meantime Liam Sheedy’s Hurling 2020 committee proposed that penalties be taken from the 20-metre line but with only the goalkeeper on the line.

That idea was trailed in this year’s pre-season competitions but won’t apply in the coming league campaign, as the “one-on-one” idea goes to the GAA’s annual congress later this month.

Galway and Corofin player Gary Sice was 12 when his club last claimed All-Ireland honours - but he feels every bit as fresh as back then. He says St Vincent’s Diarmuid Connolly is to be closely watched in the weekend’s All-Ireland club football semi-final - but he’s not the only talented player in the Dublin club side.

The Anglo-Irish handicappers seem convinced that top rated hurdler Hurricane Fly can justify his rating at Cheltenham and topple reigning champion Jezki. The consensus that Hurricane Fly has never shown his best form at Cheltenham doesn’t seem to have been factored in.

There was plenty of drama in the Sigerson Cup last week, it’s all Fitzgibbon Cup today though and hopefully the drama will continue - albeit on-the-field.

The Big games are the meetings off Cork IT and UCD, the Galway-derby between NUIG and GMIT and the all-Munster affair between UCC and UL.

You can watch The Leinster Rugby Senior Cup quarter-final between St Andrew’s and Newbridge on Setanta.

While the big Premier League game tonight is Liverpool versus Tottenham from Anfield - as the battle for top-four hots up.

1 Cheltenham faces criticism after racegoers suffer Covid-19 symptoms
2 Ian O’Riordan: Learning to run for the first time all over again
3 Davy Russell ponders what might have been for Tiger Roll
4 Cycling Ireland thrilled with take-up for Zwift League series
5 Avoid the treadmill at all costs – marathon training in the 2km radius
Real news has value SUBSCRIBE