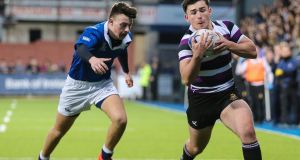 The disparity between the teams on the scoreboard is slightly misleading because this Leinster Schools Senior Cup first round match remained in the balance until Terenure College wing Zak Vaughan’s second try of the match a couple of minutes from the final whistle.

It matured as a game from an error strewn first half, where handling mistakes, undermined the endeavour of two well-coached sides that wanted to the run the ball at every opportunity but lacked the accuracy in execution to underpin that ambition.

Both sides struggled a little bit with game management, running through set moves, rather than appreciating that a more heads-up philosophy might have yielded a greater return in terms of points.

The interval pep talk and tweaks from the respective coaching cadres had the desired effect and a large crowd was treated to a thoroughly entertaining second half complete with four cracking tries, the rugby much more representative of the talent, individually and collectively, on view.

Terenure deserved their victory because they were more potent in possession and possessed a greater cutting edge out wide but will acknowledge that they enjoyed a rub here and there en route to their victory. Sam Dardis, a fourth year, is a young man with great potential. He glides over the surface and has a mature appreciation of running lines.

His try enjoyed a large dollop of good fortune and his intended pass bounced off the head of a St Mary’s player and back into his hands, but there was nothing fortuitous above the manner in which he left two other defenders lying on their backs as he cantered over under the posts.

It made up for a moment early in the match when the young fullback should have passed to Christian Collins for a certain try. Vaughan, chipped in with two tries, the first a super finish in the corner, following a slick lineout move and surge that took Terenure to within a couple of metres of the Mary’s line.

Centre Stevie Barry has an eye for a gap played a prominent role in the build-up to the Dardis try. Scrumhalf Mark Fabian was very impressive from the kicking tee, contributing three conversions, two of which were from the touchline and a penalty.

Terenure were sharper at the breakdown and in this respect hooker Jacob Henry-Hayes, flankers Jeff Clarkin and Conor O’Sullivan and captain Jack Dignam excelled. They poached turnovers at crucial times that stifled their opponents’ momentum and relieved pressure.

Mary’s played with great width to their game, trying to find a way past Terenure’s at times narrow midfield defence, but their inability to fix the man, coupled with some early passing, negated what they were trying to achieve. Still, with two minutes to play they trailed by just six points, 17-11.

Props Niall McEniff, especially, and Michael McCormack carried the ball superbly at times while captain and secondrow Niall Curran is an exceptional athlete but while they thundered into the open spaces out wide it was a little closer to the epicentre of the forward collisions that there presence was required.

Mary’s didn’t clearout effectively enough at rucks and it cost them turnovers. The backrow of Andrew McDermott, Faolan Crowe and Ronan Foley offered a several eye-catching cameos, while Ronan Waters was a primary source of possession in the lineout.

Mary’s led 6-3 at the interval, two penalties from Alexei Schuster, to one from Fabian but Vaughan’s first try three minutes after the re-start swung the game in Terenure’s favour.

When Dardis crossed on 58-minutes Mary’s trailed 17-6 but showed great character to respond with a try of their own through replacement Tomas Tierney before Vaughan’s second try, clarified that it was Terenure who would take the honours in the Dublin 6 derby.