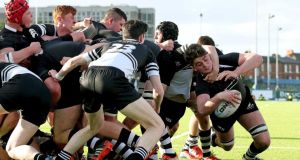 Dan Trayers scores Cistercian’s second try in the semi-final against Newbridge. Trayers in the main man in the lineout for Roscrea. Photograph: Ryan Byrne/Inpho

With a completely unforeseen pairing in Cistercian Roscrea and Belvedere, here we are on St Patrick’s Day as unquestionably deserving finalists bring perhaps the best ever Leinster Schools Senior Cup to a climax.

The same Clongowes who were essentially outfoxed by Belvedere.

For some in the Cistercian ranks this journey began back in 2013. In Tallaght of all places. That’s where they beat a seriously talented Terenure side, including Harrison Brewer, son of All-Black Mike, and Billy Dardis, both of whom have played Ireland under-20s this season.

As have Roscrea graduates Ciaran Gaffney and Oisín Heffernan.

It was the defending champions who put Roscrea out in the 2013 semi-final. A great game Roscrea had won yet managed to lose. Hard-running fullback Tim Carroll and Kerry footballer Rob Wharton were the under-16 wingers.

Keane was relentless in their replayed semi-final victory over league champions Newbridge.

“They are a group of players who fight for each other and fight with each other,” said coach Pieter Swanepoel.

Much of their tactical nous comes from outhalf Alan Tynan, phenomenal in the school’s first ever victory over Blackrock. His brilliant 48th-minute try was followed up by high fielding, over ‘Rock flanker Caelan Doris, of a Rob Kearney standard.

Tynan and scrumhalf Keith Kavanagh must direct the Roscrea maul within range of the try line.

We saw the best and worst of Belvedere that afternoon. They thundered into a 20-0 lead after a clever Jennings try before Clongowes’s famed resolve was so nearly rewarded.

Despite a raft of Leinster under-18 forwards such as captain Michael Sweeney, Daniel McCaffrey (brother of footballer Jack) and number eight Tom de Jongh, Belvedere all but capitulated when reduced to 14 men by McCaffrey’s sin-binning as 27-5 became 27-26 with five minutes remaining.

So, both teams enter the RDS with valuable battle scars.

Belvedere seek to move clear of Terenure and into second on the honours roll with 11 titles, their last coming in 2008.

Roscrea have none. This is only their fourth final appearance since 1941. It feels like the time has come for them to carve their name among the elite.