Home side take French derby with five-try thrashing of Montpellier 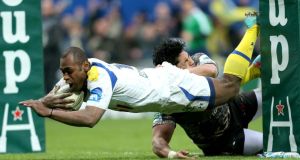 Clermont 36 Montpellier 14 : New Zealand winger Sitiveti Sivivatu scored a 60-metre try as Clermont Auvergne recovered from a sluggish start to book their place in the Heineken Cup semi-finals with a home thrashing of fellow Top 14 side Montpellier at Stade Marcel Michelin.

Sivivatu collected the ball from France centre Wesley Fofana in his own half and slalomed through the visitors' defence to help extend Clermont's unbeaten home run to 58 matches. They will host Harlequins or Munster in Montpellier for a place in the final.

“The team worked really hard that's why I scored,” man-of- the match Sivivatu admitted. “We played a big game but that was not easy at all. Credit to them they put up a big fight."

Fofana, Aurelien Rougerie, Sivivatu, Lee Byrne and Napolioni Nalaga scored Clermont's five tries after the hosts had fallen 9-3 behind following a timid start in front of their raucous supporters.

Montpellier began solidly, Benoit Paillaugue putting them 6-0 ahead with two penalties, and came close to crossing the line on a lightning-quick counter attack.

Morgan Parra reduced the arrears thanks to a routine penalty midway through the first half.

Fofana scored the first try after collecting a superb through kick from Parra who missed the conversion.

Rougerie put the hosts ahead after being set up by Sivivatu who made an impressive foray through the visitors' defence.

Sivivatu was at it again after the break with his jaw-dropping try early in the second half.

Rougerie released Byrne for the fourth try and Nalaga capped a remarkable team performance with a last-gap try.

Timoci Nagusa scored a consolation try for Montpellier in the dying seconds.