Stade Francais, given the right mood, have a sting in their tail

Hopefully, they won’t pick Leinster game to deliver a big performance on the road 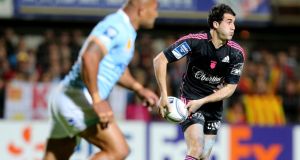 Jerome Porical in action during the semi-final win over Perpignan. Photograph: Inpho

They have a rich history. They have the usual smattering of foreign imports. They suffer acute travel sickness, though can occasionally deliver a big performance on the road when the mood takes them. They’ve not been without their financial woes or internal tensions, and turn over coaches and players at a fairly rapid rate. In short, Stade Francais are very French.

Guy Easterby yesterday intimated they would draw on Joe Schmidt’s knowledge from his three seasons there as Clermont assistant coach as well as their normal video analysis of the opposition, without recourse to contacting their former head coach Michael Cheika and ex-scrumhalf Chris Whitaker. Yet Stade are so volatile and unpredictable it’s doubtful even Schmidt’s encyclopaedic knowledge of French rugby will be that pertinent, much less Cheika’s.

At the end of Cheika’s first season in charge, in June 2011, one proposed takeover to solve serious financial issues collapsed before Jean-Pierre Savare, chairman of French security systems company Oberthur Technologies, purchased a controlling stake in the club from Max Guazzini, with Savare’s son Thomas becoming the club’s honorary president in a deal which averted an administrative relegation to the amateur Fédérale 1 league.

Cheika’s demanding style didn’t meet with universal popularity, and so the Australian was a victim of a very French coup after his second season when Whitaker was his team manager. Former Pumas’ legend Mario Ledesma was reputedly invited to be part of the coup but having been co-opted onto the coaching ticket by Cheika, instead informed Cheika of the plot and departed to Montpellier as forwards coach.

Director of Rugby
Former English flanker Richard Pool-Jones, not regarded as part of the coup, was subsequently installed as Director of Rugby, retaining Christophe Laussucq as coach and bringing in David Auradou, another former Stade Francais team-mate from a golden, high-profile era in the Noughties, as forwards coach.

But Pool-Jones shared a similar outlook to Cheika, which didn’t go down well with the established players, and wasn’t even given a full season at the helm, being moved back upstairs as club vice-President after defeats at the end of March away to Toulouse and at home to Toulon. Laussucq and Auradou took over, though Racing Metro coach Gonzalo Quesada is taking over next season, with Lussaucq linked with relegated Mont-de-Marsan.

In the last four seasons Stade have won just six of 52 games away from home in the Top 14, their two wins this season coming against the relegated duo of Mont-de-Marsan and Agen. Yet under Pool-Jones they led Clermont in their Stade Marcel Michelin fortress from the first to the 78th minute, and also overturned an 18-6 deficit away to Toulon to lead in the 74th minute.

Furthermore, since those aforementioned defeats, Stade had won four on the spin before an academic last-day 52-17 loss away to Biarritz a fortnight ago; including Amlin Challenge Cup quarter-final and semi-final wins away to Bath (36-20) and Perpignan (25-22).

Wondrous runner
In the former they threw the shackles off, with a brand of running rugby rarely employed domestically; the dangerous, giant Fijian winger Waisea Vuidravuwalu and fullback Hugo Bonneval, son of Eric and a wondrous runner with a real X-Factor, scoring two tries apiece. Bonneval was moved to the wing for the semi-final as Jerome Porical played in his native Perpignan and landed two monstrous penalties from his own half.

Beaten Heineken Cup finalists against Leicester in 2001 and Toulouse in 2005, Stade controversially lost the Challenge Cup final two seasons ago to Harlequins. “I watched that game,” said the former Harlequins prop Mike Ross yesterday, “and to be honest I thought they were pretty hard done by at the end of it. A fair few players are in the squad this time around so I think that will be a big motivation.”

They have a 90 per cent-plus return from their set piece this season and Ross, evidently, has huge respect for the Stade scrum, in particular their New Zealand frontrower Aled de Malmanche.

Stade’s run has strong echoes of Biarritz last year, when they eventually laid their hands on a first European trophy. All of the starting XV and all but two of the 23 in the Challenge Cup semi-final were rested against Biarritz, so they’ve had a three-week run-in to this final. “There’s a reason why they’ve done that,” said Easterby yesterday, “and you can see that they’re putting all their eggs in one basket, which was the only basket they had left really, and that’s going to make it a very difficult job for us.”

Indeed, this being a last hurrah for the season, for qualification for next season’s Heineken Cup, for the coaching staff and a chunk of the playing squad, though most of the starting XV are staying, they could, conceivably, be very dangerous. Stade are also, of course, tres Francais.