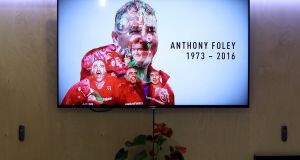 A display for Anthony Foley is mounted as a book of condolence was opened for the late Anthony Foley at the IRFU offices in Dublin today. Photograph: Dan Sheridan/Inpho

Minister for Sport Shane Ross has paid tribute to the celebrated Munster head coach, who died in Paris on Sunday morning at the age of 42.

Foley had also captained his province to their breakthrough Heineken Cup triumph in 2006.

As messages of sympathy flooded in, books of condolence were being opened across Munster and Irish flags were lowered to half-mast.

“It’s absolutely tragic, not just for sport, but for the whole nation, at a time when Irish sportsmen and sportswomen are seen as ambassadors for Ireland,” Mr Ross said. “It’s a terrible day for all sportspeople in Ireland.”

“Anthony Foley was an absolute star, who starred not just on but off the field. He was a great ambassador for Ireland at a time when all sports players and all sportsmen and sportswomen and the fans are holding the flag for the nation.

“This is reflected in the outpouring of grief that is coming not just from Limerick, not just from my department not just from Ireland but has come from all over the world in the last 24 hours.”

Mr Ross described the “quite staggering flow of grief” as beyond that which he had seen for a sportsperson for many, many years.

“People are talking today about his loyalty, about his collegiality, about the extraordinary stalwart person he was as well.

“That’s absolutely apparent from the fact that he’s now more of a star as a coach than he was as a player - that’s really quite unusual.”

“It’s a really tough and tragic day for them.”

David Corkery, former Munster and Ireland player, said he was shocked at the sudden death of Foley.

“When the news came through yesterday, for me it was like being hit with a sledgehammer - immediately the questions that you have in life ring out - why him, why not me, why not a lesser being, a lesser person, someone without kids. It’s hard,” he said.

Corkery said he had grown up with Foley from school level and were “arch rivals”.

“On numerous occasions I roomed with the guy. It’s just mind-boggling. To see how something like this can happen, it poses the question, is there a God? Is there someone up there?

“If there is, why would he take somebody like Anthony at such a young age with a young family, and his whole life ahead of him? It’s just hard,” he said.

“Anthony was never one to look for the limelight, never one to push to the front if there was a camera there, he just got on with his business, he did his job.

“The outcry from the rugby community around the world is just a symbol of how much respect he had, a symbol of the man he was, on and off the field, the effect is going to be so long on so many people.”

The University of Limerick released a statement expressing sympathy for Foley’s family and friends.

David Mahedy, director of sport at UL, said Foley was a “true leader”.

“He demonstrated this quality both on the field of play and more recently, on a daily basis, as he went about his work with Munster’s next generation here at the UL campus. He will be sorely missed by all. May he rest in peace,” he said.

A book of condolence was to be made available at the university today.