Lee Molloy and Bryan McLoughlin touch down for Tipperary school 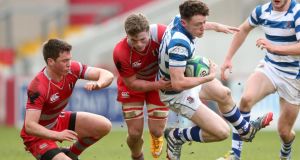 Rockwell College 22 Glenstal Abbey 3 Two second-half tries, one early and the other near the end, gave Rockwell a deserved place in the Munster Schools Senior Cup final against Ardscoil Rís on St Patrick’s Day.

At Thomond Park, Glenstal were hoping to reach their first final in 45 years and while very much in contention at half-time they were outsmarted in the second half.

Neither side could manage a first-half try but Rockwell were happy enough to be 6-3 in front at that half-time stage.

Bill Johnston landed a penalty to put the Tipperary side in front after only four minutes but Jack Stafford was then on target with a Glenstal penalty.

Fifteen minutes were played when Johnston struck his second penalty for Rockwell but it was very much all to play for.

Once Rockwell scored their first try six minutes into the second half from centre Lee Molloy it sparked a spell of sustained Glenstal pressure.

But the Rockwell defence was solid even when Glenstal had a five-metre scrum after an unsuccessful penalty attempt.

That effort came to nothing, however, and two more penalties from Johnston after 53 and 57 minutes had Rockwell in control, 17-3.