Fired-up St Mary’s within whisker of knocking out favourites 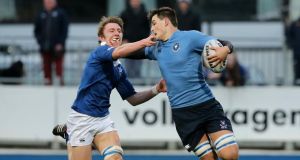 St Michael’s 19, St Mary’s 14: St Mary’s came within a whisker of blowing the Leinster Schools Senior Cup wide open with a thunderous effort against St Michael’s in the first round at Donnybrook yesterday.

This was seen as a foregone conclusion by everyone outside St Mary’s camp as the pre-competition favourites brought a list of star names, mostly in the forward pack, and the sort of prime beef you only find in the best butcher’s shop.

In hindsight, that was where St Michael’s problems started as the Ailesbury Road school played as if it would all happen for them, instead of going out and dominating the gain line.

This was evident right from the off as the Rathmines school found rhythm immediately to hold onto the ball for the first three and a half minutes.

They were given this when centre David Matthews latched onto an ill-advised counter from deep to stroll home for Derry O’Connor to make it 7-0 in as many minutes.

This was hardly the sign of a shock, especially as St Michael’s quickly hit back.

They went to the lineout where last year’s Ireland Schools captain James Ryan took the ball with ease, to set up a maul and peeled around to crash over for flanker Barry Fitzpatrick’s extras to level it in the 12th minute.

Their prop Rory Mulvihill improvised an overhead pass and hooker Gavin Barrett showed real speed to find the line for 12-7 in the 20th minute.

It was all going to plan.

St Mary’s simply refused to play the patsy. Matthews engaged in contact, number eight Niall Curran brushed off a defender and O’Connor picked up the pace of the attack for his conversion to return them to the box seat with a 14-12 lead at the interval

They looked to be on the brink of a breakthrough until St Mary’s wing Sean McCahill stepped up to intercept. He was away. But, centre Jack Kelly maintained the pursuit and caught him.

St Mary’s came in waves to get within five metres where a vital turnover triggered a counter by Byrne and number eight Max Deegan.

Mulvihill carried the ball on and St Michael’s showed patience for scrumhalf David Duggan to sneak the final metre to the line.

Byrne converted to conclude a great escape on a day when the better team lost.

1 Leinster look ready to step things up and burn off Saracens challenge
2 Born to ride, born to win: Sam Bennett, the making of a green machine
3 Rory McIlroy battles to stay in the mix as Patrick Reed leads the US Open
4 Will Connors now delivering on his massive potential
5 Keith Duggan: Surreal story of John Delaney needs to act as a wake-up call for FAI
Real news has value SUBSCRIBE

Leinster look ready to step things up and burn off Saracens challenge 06:00
Misfiring Ulster facing a torrid time in Toulouse 06:00
Etneya win at Gowran would prove a fitting tribute to Smullen 06:00
O’Sheas and Breaffy looking to take final step to a first Mayo senior title 06:00
Paul Galvin’s Wexford departure takes a little of the shine off things 06:00
Crossword Get access to over 6,000 interactive crosswords