Schmidt due in Georgia as Emerging Ireland look to improve game

Ireland have already won tournament ahead of tomorrow’s final game 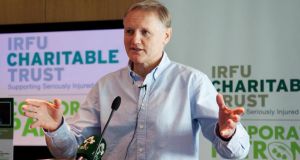 Joe Schmidt is due in Georgia today to run the rule over potential outside candidates for Ireland’s World Cup campaign.

The national head coach is due in the Caucuses for Emerging Ireland’s last match of the Tbilisi Cup against the hosts.

The final match was meant to be just that – a final – and a climax against their toughest opponents. But the failure of a second-string Georgia to even collect a losing bonus in their surprise defeat at the hands of Emerging Italy on Wednesday night means Ireland have already won the tournament before tomorrow’s kick-off.

Silverware, however, was never the priority in this development trip, rather the opportunity for younger players to experience another level and, for some, a chance to impress the national selectors.

“Joe has been fantastic. He was with us in camp in Dublin before we left, he led in terms of selection, engaging with the provincial coaches, including myself, so he is very closely connected with this [squad]. As are Les Kiss, Simon Easterby and the whole of the management team,” said Emerging XV coach Allen Clarke.

“Footage of our first two games are already back in Ireland being broken down, reviewed and analysed.

“Joe is obviously looking at players who, in the short term, could play themselves into the World Cup, but also at a few who could be prospects for the next World Cup, as are the provinces for the next Pro12 season.”

Billy Holland takes over the captaincy from Ruddock and will be among those hoping at least for a place in this summer’s World Cup training after his involvement, albeit limited, with the Six Nations.

However, Ireland must improve from their previous games when they failed to build on good starts against both Emerging Italy and Uruguay.

Clarke added: “We need to produce an 80-minute performance, not just a half against better opponents in Georgia.”