The Ulster and Ireland rugby winger is watching a lot of television following a ligament injury to his big toe. So how did it feel to be named Player of the Year 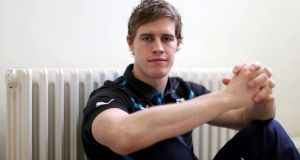 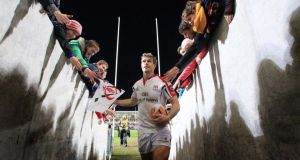 Andrew Trimble with fans at Ravenhill after an Ulster Pro12 match. Photograph: INPHO 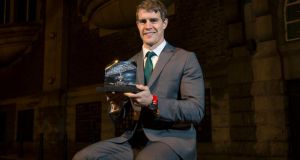 Player of the Year: Andrew Trimble with his award this week. Photograph: Billy Stickland/INPHO 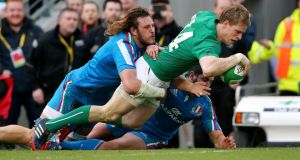 Andrew Trimble will be at Lansdowne Road tomorrow, commentating on the international rugby match against Georgia for BBC Radio Ulster. But most of the time these days he’s watching a lot of television. “I watched Love/Hate,” he says. “It was nice to see Nidge getting taken down. Homeland. The Fall. I’ve rewatched Game of Thrones.”

Trimble is home alone, all day. His wife, Anna, is a doctor, and a busy one. “It’s tough on her,” he says, “because she comes home knackered and I can’t even put the bins out. I’ve never slept so much or relaxed so much in my life.”

The Ulster and Ireland winger received a ligament injury to his big toe during Ulster’s Pro12 game against Glasgow on October 11th. He was just about to become the most capped Ulster player of all time. Last Tuesday he was still wearing a cast, and walking with crutches.

He was in Dublin to accept the Player of the Year award from Ireland’s rugby writers – a pretty tough home crowd. We meet as the catering staff are folding the napkins in preparation for the awards dinner. We sit at one of the big white tables. Trimble orders a pint of Guinness.

He looks strange, and a lot more solid, in a suit. He’s not complaining, because he’s never been significantly injured before. “It had to happen,” he says. “Statistically.”

Now he can’t even drive. “I sit around, waiting for someone to call and bring me out for a cup of coffee,” he says, smiling. He watched Ulster’s defeat to Toulon from the stands , with his father. “And we should have beaten Leicester.”

How very different it was in early October, when I interviewed him in Belfast. Ulster were looking great. Up at Ravenhill you could feel the optimism. I walked in under the memorial arch, dedicated to the Ulster rugby players who died in the two World Wars, and which has been preserved in the new development of the ground. The clock on it keeps good time. Everyone said, “You’re here to see Andy.”

Cooking for his wife

For example, when asked if he cooks dinner for his wife, who works longer hours than he does, he replies: “Every now and again. Not nearly as much as I should do. And it’s not nearly as good as it should be, either.”

When prodded gently about his role in the international Ireland that won the Six Nations last season, Trimble says: “I never felt so involved. I never felt so included. I felt I belonged. That that was where I was meant to be.”

After the Six Nations win he gave an interview on the sideline to the new rugby commentators Ronan O’Gara and Shane Horgan, the Ireland veterans. “Shaggy, yeah,” Trimble corrects, gently.

In what was was surely one of the interviews of the year, Trimble glowed under the praise of the two men.

“That meant the world to me,” he says now. “ The respect of your team-mates. I love those guys socially and I loved playing with them. Ronan and Shaggy are great lads, and now they’ve hung up their boots and moved on. I’d put in an awful lot of hard work, and they could see that.”

His Player of the Year award is made all the sweeter by the fact that the Six Nations victory was the culmination of a lonely struggle to perform on the Irish team.

“I wouldn’t call it a dark night of the soul,” he says. “I always had the respect of my Ulster team-mates. I just couldn’t transfer my performance. Maybe I felt a little bit out of it in Dublin. I didn’t perform well in a green shirt, and that became a bit of a thing.”

I say that some people who know about rugby think his fight for a place on the international team is a testament to his character. “A few people have said that,” he says simply. In other words, it bloody is.

If he wasn’t a star rugby player, what would he be? Would he, for example, even bother with club rugby? “Yes, I definitely would have played for a while. I’m not sure I’d still be playing now. It’s a big commitment if it’s not your main job. But I would have liked to play for Ballymena for a bit, maybe Coleraine.”

And what job would he have had? “I’ve no idea. I applied for optometry when I was at school, but I don’t think I’d ever consider doing that now. When this finishes . . . I’ve no idea. None. I always wanted to play rugby, so it made things very simple for me.”

That passion came from his father. “Very much so. I remember, when I was younger, I used to have a Premier League football album. And my dad confiscated it. And replaced it with a book about Irish rugby.”

Trimble laughs as he says this. His father was a rugby player, of course. “My dad’s name is Maurice, but the boys call him Thumper. I don’t know why. I think someone started a rumour that that’s what they called him when he played. I think he fancied himself as being very tough.”

With rugby the passion was pretty much instant.” I just knew that I wouldn’t love anything else as much as I love rugby.”

I ask if he has ever been concussed, which is a stupid question to ask a professional rugby player. He helps himself to a chocolate biscuit.

“I was concussed last year, at home against Saracens. I wasn’t out cold, but I was very dazed and quite confused – but only for, say, 10 seconds. And then I recovered very quickly, and then I got taken off. Last time I remember before that was when I was 20 or 21. But I’m sure I’ve been concussed at other times.”

When asked what else he is good at, there’s a modest pause. “Oh, I play the drums in church. I don’t know if the songs would be that well known, really. It’s just the guy who leads the worship, he usually arranges for me to play the drums, and my wife sings.”

This is where I could ask him about his evangelical faith and reading psalms before matches, all of which has been fully reported before. But I haven’t the heart. It seems intrusive.

I leave him alone at the big white table, immobilised but trusting. A star.