Raging calf Moore still has learning to do

Leinster’s superior work-rate told against Castres, but can’t disguise the fall off in their attacking game 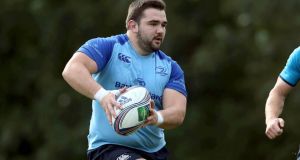 “I recall Robert De Niro’s portrayal of Jake LaMotta in Raging Bull and can’t but help think of Martin Moore (and Stephen Archer et al) as they learn their trade.” Photograph: Donall Farmer

According to playwright Diane Grant, it’s better to walk alone than with a crowd going in the wrong direction. I’m not sure Grant had power plays in pan-European rugby in mind but the direction I’m fascinated with is that being taken by Leinster prop Martin Moore.

Moore and Munster’s Dave Kilcoyne will be travelling in different directions these coming weeks and to them add Ulster’s Iain Henderson, whose play I was especially looking forward to this Autumn International series.

Oscillating between secondrow and backrow, as afforded by his array of skills, I think Henderson is the future powerhouse, ball-playing secondrow we need in our national side.

Last week in the RDS, Moore faced a crowd going one direction, led most notably by Romanian international loosehead Mihaita Lazar. I recall Robert De Niro’s portrayal of Jake LaMotta in Raging Bull and can’t but help think of Moore (and Stephen Archer et al) as they learn their trade.

Interestingly, Lazar attacked every scrum, pivoting his upper body inwards, dipping and then lifting to dislodge Moore’s right arm and powering on the pressure.

As this was unfolding no doubt Moore had LaMotta in mind: “I’m gonna win. There’s no way I’m goin’ down. I don’t go down for nobody.”

Well Lazar in his exuberance to murder Moore made a fatal error. Moore was up for it and in Lazar’s need to pummel, he lost control and although extremely powerful, ultimately destabilised his Castres scrum.

A lesson to all powerful scrummagers: a stable attacking scrum is the most potent attacking tool on the pitch.

Having seen off Lazar after 28 minutes Moore then had Saimone Taumoepeau to contend with. Taumoepeau brought a different approach, which provided a less aggressive attack on Moore but crucially, a steadier scrum platform which moments later sent Castres down the left-hand tram tracks for Rory Kockott’s 32nd-minute try.

For those tiring of the scrum debate, watch the 31st-minute Leinster scrum that Castres attacked and turned over, which led to the Castres put-in. Taumoepeau had a much cleverer approach to Moore, which given time, will teach the young Leinster man much.

Leinster, like any other side, lose the ball, and often maintain possession stakes far below the average. But in the RDS they had a work-rate akin to FC Barcelona in getting it back, especially when sloppy play conceded possession; they displayed a monstrous hunger to cover up a team-mate’s error.

In this fashion Jamie Heaslip and especially Seán O’Brien were savages.

A 9-7 half-time score indicates Leinster worked harder for their first-half lead than they had to in winning 19-7 by full-time but with Jimmy Gopperth at 10 and Rob Kearney at fullback, Leinster used field position to pressurise Castres with bombs and wipers, all proving fruitful and extracting magnificent skill from Kearney.

As the game ticked by, with Castres simply not going away, Leinster changed the emphasis towards their running game which, on foot of the opposition, the scoreboard and their subsequent execution, was a mistake.

Leinster did not attack the space as they have in the past. This may be due to an emphasis on defence but their backline play was at times very lateral, drifting towards the touchline, making the defence easy.

Growing frustrated, Gopperth carried too much “crap” ball into traffic and lost tactical awareness. Ian Madigan also carries but attacks the line when others have created the chances.

With O’Brien in the form of his life, opportunity was plentiful, especially in multi-phase plays, with Castres fatties loitering in midfield.

Here’s where Gopperth and co appeared naive; instead of attacking their fatiguing weak shoulders in midfield, Leinster shipped the ball wide into the tram tracks, where the touchline caught them out too easily.

Madigan is another man going a slightly different direction these past few weeks but on careful reflection, the Leinster backline look more dangerous with him at 10 and when adding Eoin Reddan to the mix the outside backs look more potent.

Madigan gets his outside backs into better running positions, angles and space. Brendan Macken, at 13, did get outside once or twice, showing good power, but Leinster didn’t create the running line space in this channel for him to really power and flex his muscle.

Two Castres sinbinnings aided the home side, who have now won two from two; an excellent start but I’ll very much enjoy Leinster’s attack coming back.

Secondrow injury reduces options for Ireland but Devin Toner is the most technically improved of the lot. His progressing technique allied to his phenomenal work-rate mean he is now a very worthy option.

Team sport is not the place to walk alone, away from the crowd, where Cian Healy and Moore exhausted themselves in an effort to keep their team going the right direction.

In the end, Moore must have chuckled, as LaMotta did, after been beaten half to death by Sugar Ray Robinson, “Hey, Ray, I never went down, man! You never got me down, Ray! You hear me, you never got me down.”
liamtoland@yahoo.com