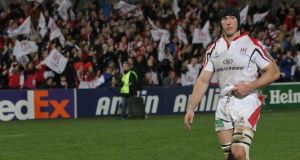 Ulster’s Stephen Ferris will sit out Friday’s game over Glasgow Warriors at Scotstoun after he “sustained an ankle injury in training this week”, according to the province.

The news is likely to cause serious concern among Ulster fans who have one recently seen their talismanic backrow return from 16 months on the sideline with a chronic ankle problem.

This latest injury is to the other ankle but the big backrow has had problems with both. Nevertheless, inside the Ulster camp they hope to have him back for the visit of Leinster on May 2nd.

Otherwise, Mark Anscombe has made three personnel changes and three positional to the side that hammered Connacht 58-12 at Ravenhill last weekend.

Darren Cave’s return to the centre means Tommy Bowe moves out to the right wing, Andrew Trimble switches to the left and Craig Gilroy drops to the bench.

There’s no change in the halfbacks, with Paul Marshall continuing alongside outhalf Paddy Jackson and Ricky Andrew remaining at fullback in the absence of the suspended Jared Payne.

Prop Tom Court returns to the frontrow in place of Andrew Warwick.

Robbie Diack’s injury means Chris Henry moves to the blindside of the backrow and Seán Doyle comes on the openside, with Nick Williams at number eight.

Centre Peter Horne will start his first game for Glasgow since the play-off defeat to Leinster last May, after making his return form injury earlier this month as a replacement in the win over Benetton Treviso and featuring in last weekend’s win at Munster.

Mark Bennett will come in at out outside centre and Finn Russell moves to outhalf in place of Duncan Weir.

“Last week was a precious win for the club but we have another huge game in prospect at Scotstoun tomorrow night,” said coach Gregor Townsend today. “Ulster are coming to Glasgow high on confidence and ahead of us in the league – so it’s a very important game for both clubs.

“What impressed me most last weekend was our players workrate and how we kept taking the game to Munster. We’ll need to repeat that effort again tomorrow. Our goal is to build on the win in Limerick and ensure we keep the momentum going over the next few weeks.”