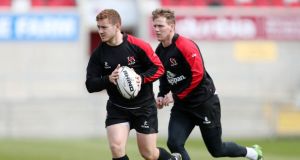 Ulster arrive in Swansea on the back of a handsome win over Leinster last Saturday, their third successive victory.

However they are facing a tricky last-day encounter – against opponents who are themselves in must-win territory – in order to cement their place in the play-offs.

Accordingly, Sky are taking their cameras to Swansea for this one as, of course, are BBC Northern Ireland.

A month ago, the Ospreys appeared to be condemned to their first European Challenge Cup campaign. While this might still be their fate, three bonus point wins have kept their top six hopes alive until the last day, unlike the Cardiff Blues, whom they beat 40-27 last week.

Hence, although they also need a favour from the Scarlets in Thomond Park, coach Steve Tandy is bullish about their prospects this afternoon.

“There’s a really positive mood in the camp this week,” he said. “The desire and application of a team that has an average age of 23/24, is outstanding and they’ve shown what being an Osprey is all about in recent weeks as they’ve grown on and off the field.

No throwing in the towel

“We need more of that this week now, we want the boys to be relentless, to know their roles and to be clinical. If we can hit the right standards across the park then we have a chance of doing what we need to. Then it’ll be a case of what happens elsewhere. There’ll be no throwing the towel in.”

Indeed, in that sense, the Ospreys’ need is certainly the more acute and they do have home advantage.

Yet Ulster, who have lost only one of their last five meetings with the Ospreys, still look the better team, and capable of completing a historic clean sweep of Irish away wins at the Liberty in one season.

Riyad Mahrez bags hat-trick as Man City high five Burnley at Etihad yet again 17:08
Adrian Meronk gets over poor start to keep lead in South Africa 16:31
Klopp furious as injuries mount and VAR decisions prove costly 16:31
Lewis Hamilton keeps the foot down in the desert to claim 98th career poll 15:43
Kilkenny defence keeps Cork in check to claim spot in camogie final 15:20
Here is your handy guide to sport on television this week