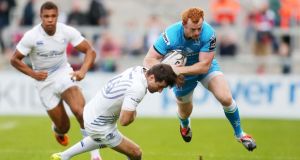 Ulster’s Peter Nelson: went well in the victory over the Ospreys though a groin niggle meant Stuart McCloskey took the placekicks, Photograph: Inpho

Despite the fairly emphatic nature of their 28-6 bonus point thumping of the Ospreys in last weekend’s Pro12 opener, in Belfast, Ulster know they have plenty of work-ons to address ahead of Saturday’s visit to the Scarlets (kick-off 3.0).

One area to be sorted out is Ulster’s scrum which, surprisingly, coughed up far too many penalties last Friday – Wiehahn Herbst seemingly the culprit – while the need to be even more accurate in the collisions and breakdown areas is also a priority particularly after the performances of Scarlets backrowers John Barclay and James Davies in the Welsh side’s eye-catching victory to end champions Glasgow Warriors’ 20-game Pro12 winning run at Scotstoun.

Ulster head coach Neil Doak also appears to be going to the Scarlets with Peter Nelson again being given a run at outhalf with the injuries to Ian Humphreys and new signing Sam Windsor seemingly also keeping them out for this weekend’s second segment of games ahead of the Pro12’s three-week break.

Nelson, whose previous outings for Ulster ahead of last Friday had all been at wing and fullback, went well in the victory over the Ospreys though a groin niggle meant Stuart McCloskey took the placekicks.

Ulster expect to have Robbie Diack back in the squad for the trip to West Wales after the Ireland international missed the Ospreys game due to illness and with Roger Wilson, Nick Williams and Willie Faloon all showing up strongly last Friday Doak will have a some fairly useful resources to call upon in the key backrow battle.

“We know we’ll have to be better at setpiece than we were last week,” said Doak who will again have prop Callum Black sidelined. “But if we can finish this block of games and go into the break with two wins then that would be a great opportunity to kick-on when we get back.”

Derby wins moves Atalanta to second in Serie A 08:53
Mikel Arteta warns Arsenal must invest significantly to compete 08:15
Frank Lampard: top four race will come down to ‘focus and attitude’ 08:04
Chelsea remain in third after Norwich win; GAA dressing rooms to remain closed 07:25
Jack Charlton era made GAA sit up and realise its greatest strength 07:00
Here is your handy guide to sport on television this week