Tommy O’Donnell returns to Munster side for Glasgow trip 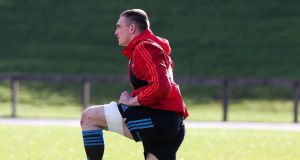 Tommy O’Donnell, Donnacha Ryan and James Cronin have all been made available for Munster’s trip to play Glasgow Warriors on Friday night.

The trio havebeen released from Ireland duty so they can feature for the province, with Anthony Foley’s side in danger of slipping out of the Pro 12 top six.

O’Donnell, who started Ireland’s draw with Wales and came on as a first half substitute for Sean O’Brien in the defeat to France, comes into the pack along with Ryan.

They are two of five changes to the first team made by Foley, with Niall Scannell coming in at hooker, Tomás O’Leary starting at scrumhalf and academy centre David Johnston joining Rory Scannell in midfield.

Defending champions Glasgow have also been able to recall a number of internationals, with Sean Lamont and Duncan Weir returning to their starting line-up.

The fixture has been moved to Kilmarnock’s football ground, Rugby Park, with Scotstoun currently waterlogged.