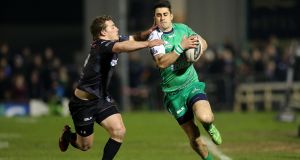 Connacht’s Tiernan O’Halloran (right) has been ever-present for Connacht this season in the Pro12. Photograph: Ryan Byrne/Inpho.

As a home grown product of Clifden, Galwegians and the Connacht academy, Saturday’s top-of-the-table rendezvous with Leinster at the Sportsground means all the more to Tiernan O’Halloran. Having made the journey from the terraces to the pitch, he describes it as probably the biggest interpro he has ever played in.

As a kid, playing and studying in Clifden and then Garbally College, O’Halloran came to the Sportsground to cheer on his province, dreaming of being out there himself one day.

“I don’t think the crowds were the same back then,” he notes with a smile in reference to Saturday’s 7,300 sell out. “A lot of them were wet as well and you were hiding under an umbrella. But now the Clan Terrace is here and the atmosphere has just grown and grown. I suppose when you’re top of the table as well the buzz around the city is building all the time. To have the bulk of 7,000 cheering you on just gives a massive lift.

“When I was a young fella I used to love going to games and even as a Connacht supporter growing up you’d like to see the Contepomis and O’Driscolls coming to the Sportsground. I’m sure a lot of the young Connacht supporters will be idolising Sexton and those lads as well but they’re coming to the games to support us, and it’s brilliant to have that.”

Having grown up in Clifden, and began playing underage rugby with the Connemara All Blacks, while also playing Gaelic football, O’Halloran moved to Garbally College. His father, Aidan, was on Offaly’s All-Ireland winning football team in 1982 and was Connacht Branch president in 2012.

After winning a Junior Cup with Garbally, O’Halloran junior went to Roscrea, and represented Ireland at schools and under-20 level while coming through the Connacht academy.

O’Halloran is one of many to have flourished under Pat Lam, and by dint of playing more at fullback than on the wing, is enjoying the back three’s licence to counter-attack in the league’s most prolific team.

“The way Pat wants us to play, he places a big emphasis on counter-attacking rugby, and obviously when the weather is good it’s something we’re better at. We’ve got some seriously quick guys on the wing as well. We’re happy when teams kick to us and keep the ball in play, because then we’ll have a crack.

This season O’Halloran has been an ever-present in Connacht’s 17-match campaign, scoring four tries, and says it’s been the most enjoyable in his five seasons with the province.

“The rugby we’re playing is very enjoyable and when you’re top of the table it’s easy to be in a good place as well. I just really look forward to coming in every day and seeing the lads. It’s a position I’ve never been in personally, coming towards the end of the season, and with Leinster coming to a packed house I’m buzzing for this weekend.”

Now in his seventh season with Connacht, O’Halloran admits to receiving a huge boost from the sight of five teammates playing for Ireland against Italy. “To see five of the lads on the pitch at one stage in a Six Nations was unbelievable. It’s never been seen before and it does give us a massive lift. They earned their opportunity and I thought they took it as well. All the lads involved in the Irish camp are bringing training here to another level, and hopefully there’ll be plenty more in the future.”

O’Halloran notes that Connacht already surpassed their biggest league points tally by the beginning of February.