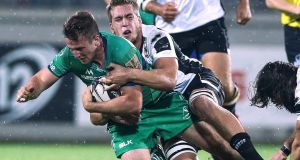 Connacht’s Jack Carty is tackled by Edoardo Padovani of Zebre during the Guinness Pro 12 game at Lanfranchi Stadium in Parma. Photograph: Matteo Ciambelli/Inpho

An unexpected lightning and thunderstorm in Parma caused Connacht’s Guinness Pro 12 fixture with Zebre to be abandoned at half-time.

Connacht might well believe the weather gods granted them a favour as the champions were struggling against the lowly Italian side and were down by 22-10 at the break.

Parma had enjoyed temperatures in the mid-20s throughout the week, but the storm had threatened throughout the opening half with ominous black clouds covering the sky above Stadio Lanfranchi.

However, it was not until just before the break the deluge began, forcing the 2,000 crowd back into the upper areas of the stands. The downpour was unrelenting for 12 minutes of half-time and another 15 minutes before referee Ian Davies made the decision to call the game off. The game has not yet been refixed.

This was certainly a game that looked like going Zebre’s way. A poor opening half from Connacht, contrasted with Zebre, who played with the verve reminiscent of the champions.

They grabbed the opening try after seven minutes after Cian Kelleher was caught on the deck, maintaining possession with their influential captain George Biagi taking the lead, helped in no small part by their backrow. From a five-metre scrum the hosts sucked in the defence as the forwards tried to barge over, but when the ball was spun wide centre Tommaso Boni capitalised on the overlap to touch down out wide, with outhalf Carlo Canna missing the touchline conversion.

Connacht’s response came seven minutes later when Niyi Adeolokun sliced through the cover on the angle, and opted for a long skip pass to Tiernan O’Halloran who finished off and Jack Carty adding the extras.

Memories of last year’s scoring feast began to haunt Connacht. From the restart the champions lost possession and Zebre pounced . When outhalf Canna found Maxime Mbanda in support just a couple of metres out, the flanker had the momentum to force his way over for the Italian’s second try, which Canna converted.

Although Carty reduced the lead with a 29th-minute penalty for offside just as the thunder and lightening started to threaten, the hosts continue to play with more spark. Taking advantage of every Connacht mistake, Giovanbattista Vendetti countered up the left wing, and the supporting pack continued to break Connacht’s tackling all too easy. Canna once again was pivotal in finding Jacopo Sarto who powered over from short range with Canno converting.

Connacht, struggling to find their fluidity in attack, were not helped by too many errors, which continued to hand the initiative to the Italians. When fullback Edoardo Padovani finished the half with a penalty from halfway to help the Italians into a deserved 22-10 lead, their performance must have pleased the watching Conor O’Shea.