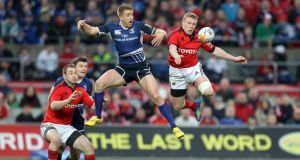 Munster and Leinster are scheduled to renew their televised rivalry on October 4th. Photograph: Inpho

Sky Sports have opted to televise the Guinness Pro 12 fixture between Leinster and Munster at the Aviva Stadium on Saturday October 4th, with the return fixture at Thomond Park on St Stephen’s Day to be screened by TG4 as part of the four-year deal whereby Sky will broadcast 30 live matches per season as well as the semi-finals and final.

Under the terms of the deal, Sky are not permitted to choose the same fixture twice. Thus, the pay-per-view broadcasters have also opted to televise Leinster’s clash against Ulster at the RDS on Saturday, January 3rd, which means they may not show the return meeting at Ravenhill in late April.

Connacht, who host Leinster on Friday, September 19th, will have their home game against the Scarlets screened by Sky on November 29th.

Another feature of the new landscape is that the last two rounds of the Pro 12 and the play-offs will be run off on four consecutive weekends in May, with the new European Cup quarter-finals, semi-finals and final to be rushed off on the first and third weekends in April and first weekend in May, so as to accommodate French club demands to reserve May for their Top 14 run-in and finale.

As a further part of the deal, Sky have cornered off Saturdays for their coverage of the Pro 12, with eight of its 16 nominated fixtures in the opening 13 rounds kicking off at 2.40pm on Sky Sports 1 to take on BT’s coverage of Premiership matches at 3pm. The others are in a tea-time slot (four are at 5.15pm) on Sky Sports 2, with only one as late as 7.30pm.

The league’s terrestrial broadcasters, TG4, BBC Wales and BBC Alba, are televising games on Friday nights, with S4C opting for Sunday, save for a couple of exceptions. Ulster and BBC NI are still in negotiation for continuing coverage of their games, although an agreement is expected imminently.

There also remains the ongoing impasse between the Welsh Rugby Union and their regions regarding a new accord, and while the union have informed the regions that they will be representing Wales in the Pro 12, it is unclear as to how this will work out financially. Furthermore, the organisers of the Anglo-Welsh LVV Trophy have also jumped the gun in finalising their fixtures, which will clash with the seventh round of fixtures in the Rabo Pro 12, with the Ospreys thus set to host

Connacht and Gloucester, and Cardiff to host Munster and the Scarlets, on the same weekend of October 31st.

Meanwhile, following on from their training camp in France Connacht report that Andrew Browne (meniscal tear to his knee), Aly Muldowney (ankle sprain) and winger Matt Healy (hand fracture) will be sidelined for four to five weeks.