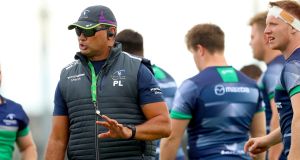 Pat Lam has named his starting XV for the opening game of Connacht’s Pro 12 title defence against Glasgow. Photograph: Inpho

Defending champions Connacht begin the defence of their Pro 12 title against Glasgow, the side they memorably beat in last year’s semi-finals, on Saturday evening.

And coach Pat Lam has handed a competitive debut to new signing Cian Kelleher for the season curtain-raiser at the Sportsground. The former Leinster fullback starts alongside Niyi Adeolokun and Irish international Matt Healy in the back three.

The fixture aganist the 2015 champions marks the start of life without the departed Robbie Henshaw, and Eoin Griffin - back in Galway after two seasons with London Irish - takes the number 13 jersey.

Inside him is last season’s Pro 12 player’s player of the year Bundee Aki.

Up front Denis Buckley makes his return after a lengthy spell out with an ankle injury, while Ireland pair Ultan Dillane and Finlay Bealham also start.

Ahead of his side’s first game as defending Pro 12 champions, Lam said: “What an exciting game to kick off a new season at home where we have two teams who really like to express themselves. Games against Glasgow are always tough and uncompromising and with their impressive selection of international players, we expect that to be no different tomorrow.

“It’s a new season and a somewhat new-look side with just eight who started at Murrayfield in May lining out tomorrow. Today is the last time all 12 teams will be level on points. With five points on offer now our focus is on the process which will give us the best chance of winning.”