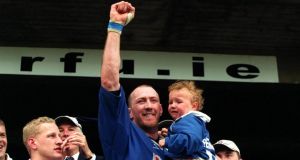 St Mary’s captain Trevor Brennan with his son Daniel after defeating Lansdowne in the club final in 2000. Photograph: INPHO/Billy Stickland

This weekend 15 years ago I played in arguably the last great all-Ireland club final. There were four British and Irish Lions, internationals, and outstanding club players that made it a real old-fashioned encounter.

Lansdowne and St Mary’s that day, akin to Toulon, even had internationals on the bench.

Last weekend I sat in Aviva’s East Stand 15 years on. The difference? Obviously the absence of Lions et al. But one difference was the lack of “mature” men. There was no Angus McKeen-type forwards, akin to grisly French tight heads. There were no Trevor Brennans.

Spread the net wider and names like the famed three Gers, Young Munster’s backrow or their secondrows Ray Ryan and Peter Meehan put the fear of God into you.

The average team 15 years ago captured extremely talented emerging guys (Gordon D’Arcy) out of school and players well into their 30s.

Apart from age there was precious little difference in quality of play.

In fact, I venture last Saturday’s final had as much ambition, skill and execution as was evident when I played. It was a super rugby match far outweighing Leinster’s previous night’s work in the RDS.

A massive nod to both coaches – Clontarf’s Andy Wood and Lansdowne’s Mike Ruddock – as they bucked the trend of national and provincial coaches, attacked, offloaded and used the full width of the Aviva.

Lansdowne were more clinical in their attacking visits. Clontarf were probably more inventive and certainly tested Lansdowne’s defence throughout. In that way the north sider’s will be disappointed in not converting more from their brilliant line breaks yet Lansdowne earned their victory.

That he did it with 13 new starters in both key games against Clontarf is remarkable.

Where have the 13 players gone?

Most have transitioned into the professional ranks, which implies Lansdowne, like many of our elite clubs, have done professional rugby some service.

Of course, Lansdowne are not unique in this; silently housing quality young player before an opportunity opens up for them here in Ireland or abroad – hooker Tom Sexton to Super 15 and tight head Jack O’Connell to Bristol.

Their compensation? What service is pro rugby doing the club game?

The IRFU is rolling out a points system not entirely dissimilar to the “draft” in US sport. It appears each club player is awarded a weighting, all adding up to a magic number.

Makes sense for the lower divisions as they need to protect their long-developed assets from poaching by their neighbourly clubs. However clubs in the provinces are being decimated, with Dublin’s economy sucking in young talented players regardless.

Age is also an issue where Ron Boucher, Lansdowne’s highly-talented captain and number eight, is heading into his last season. D’Arcy, who played in that final with me 15 years ago is 35, could have played last Saturday, and will likely outplay Boucher; too old at 29!

Where to for club rugby? The top division with 10 teams playing home and away is a super advertisement for our game, high on entertainment, quality and youthful enthusiasm.

Interesting anomalies exist where the pro game can whip a player away at any stage yet the club cannot replace them under a wild card.

This is an ever-present danger that the elite clubs understand. But then that’s how it should be, the cream should rise to the top, making the elite clubs a bridge between the pro and amateur game. Then a major step would be to not apply a one-fits-all tournament rule book across the divisions.

For instance, rolling subs (in elite division only) would afford an opportunity to have two younger, more vulnerable props on the bench where they could be introduced stealthily to the game and, should they struggle, could be withdrawn. This would promote their development into the pro game.

Clearly props are an issue coming from their unique school scrum laws where unique laws can satisfy/promote development.

Further down the pecking order in Division 5 you’ll find proud ambitious rugby clubs intent on survival in their senior status with far different challenges than Wood and Ruddock experience. Hence their rules/laws need to be adapted to their needs; getting players playing.

Many in their mid-20s are walking away, joining gyms, looking good and opting out. Ten teams meaning nine away games across the country, costing hugely in time and financial resources, may not be the answer in building engagement.

A provincial system feeding into the elite teams, with a whole set of laws that maximise fun and community engagement, may help the dwindling numbers.

What happened 15 years ago? In the end St Mary’s captain Trevor Brennan raised the cup in his right hand as his son Daniel – now captain of the French U-17s – rested “gently” in his left arm.

Mark McHugh, Lansdownes’s back’s coach last Saturday kicked off for St Mary’s. As the ball sailed over my head to Collie McEntee I prayed that he’d catch it and get us going forward. He caught it but like an Exocet missile Brennan pummelled man mountain McEntee. Game over 22-25!

PS. There’s way too much for one article so more next week.