New-look Ulster can expect a warm welcome in the valleys 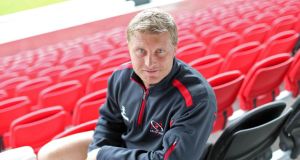 Franco Van Der Merwe is one of three players making his competitive bow for Ulster tomorrow.

The sub-text to Ulster’s first match of the season under interim coach Les Kiss will be closely monitored for signs of the Ireland play book.

Kiss has an opportunity to prove himself as a head coach, while Ulster players, following a summer of discontent that saw both David Humphreys and Mark Anscombe depart along with several key players including Johann Muller, John Afoa, Tom Court and Stephen Ferris, will hope to impress. For Ulster and Ireland.

Llanelli and Parc y Scarlets will be new to a number of the Ulster debutants including Louis Ludik, Franco van der Merwe and Wiehahn Herbst, who will dip their toes into the Welsh heartland for the first time against a side with a swagger. They beat Humphreys’ Gloucester last weekend.

Ludik, who joined Ulster in the summer, starts the game at fullback. Michael Allen is selected on the right wing with soon-to-be-Irish Jared Payne and Stuart Olding centre partners.

A healthy Craig Gilroy starts on the left wing with Ian Humphreys and Paul Marshall maintaining their partnership in the half-backs.

It’s a new look front row for Ulster with Callum Black starting at loosehead, Rob Herring, who won his first cap for Ireland in the summer, at hooker and summer signing, Herbst stepping into Afoa’s shoes at tighthead prop.

Ireland’s Dan Tuohy and Springbok van der Merwe are paired in the second row with a back row of Robbie Diack, Chris Henry and captain Roger Wilson.

Luke Marshall and Andrew Trimble are selected on the bench but there is no sign this week of Irish hooker Rory Best or lock Iain Henderson.

Scarlets’ coach Wayne Pivac plans on welcoming Ulster with both barrels and has named no less than 12 international players in his starting side.

“Ulster have been a quality side for a number of years and have been a constant in the play-offs in recent years,” said Pivac. “We’d like to improve on our sixth place, to do that we have to be able to compete against the Ulster’s and Leinster’s of the competition on a weekly basis. There’s no better team to have first up at home.

“The boys have done a lot of hard work and we’ve seen a couple of good runs against Bath and Gloucester – we don’t read too much into the pre-season but it is encouraging and the guys are looking forward to getting back out there.”