Munster welcome Donnacha Ryan back to the squad for Ospreys trip 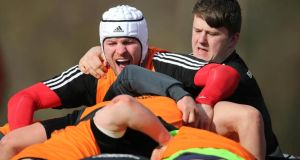 Irish international Donnacha Ryan has been included in a matchday Munster squad for the first time this season.

Head Coach Anthony Foley has made just three changes from the starting line-up that defeated Glasgow Warriors last weekend to that which will face Ospreys at the Liberty Stadium on Saturday afternoon.

Following the successful rehabilitation of a foot injury sustained against Benetton Treviso in March of last year, Ryan is in the Munster 23 for the first time this season. Harbouring hopes of a spot on the World Cup squad no doubt he’ll be looking to slot back into the thick of it as soon as possible.

In the tight five, Dave Kilcoyne comes into the starting front row at loosehead alongside Eusebio Guinazu and BJ Botha, while in the back row Dave O’Callaghan returns at six.

JJ Hanrahan remains at full-back, with Felix Jones coming into the back three on the right wing alongside Ronan O’Mahony on the opposite flank.

Meanwhile Darren Cave will captain Ulster for the first time when the province take on Newport Gwent Dragons on Sunday afternoon, in search of a fifth consecutive win in the competition.

Samoa international, Mike Stanley, is named at inside centre and will start his first game for the province.

He is selected in place of the suspended Luke Marshall and is one of two changes to the side that beat Scarlets at Kingspan Stadium last weekend.

The other sees Ireland international backrow forward, Iain Henderson, picked at blindside flanker in place of Roger Wilson, who also misses the game because of suspension.

Ireland international, Dan Tuohy, partners Franco van der Merwe in the second row. Robbie Diack has recovered from injury and is named among the replacements.