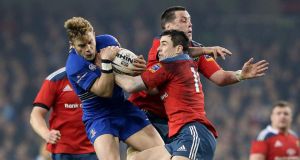 Leinster v Munster Aviva Stadium, Saturday 6.30pm, Live Sky Sports 2
It’s disrespectful to all others to say the annual early autumn run-in between Leinster and Munster constitutes the official start of the season. That would be to overlook Connacht’s ambushing of Leinster in Galway two weeks ago, not to mention the flying starts made by Glasgow and the Ospreys. But once again one of the world’s biggest and oldest rivalries assuredly provides a lift-off to the season.

As with the previous four campaigns, the Guinness Pro12’s biggest crowd of the season, 43,000-plus, will generally do that, all the more so as both sides are scratching around for their best form. Hence, for one of them, victory tonight will indeed kick-start their season.

Two tribes go to war and all that. In truth, perhaps because the stakes have not been so high lately, some of the heat has been extracted from this fixture. They have not crossed swords in European combat for six seasons, nor indeed in the knock-out stages of the league since Munster’s last trophy success in the final four seasons ago. That constituted a 16th meeting in six seasons, whereas they’ve met just eight times since then.

Yet, as Rob Kearney maintained during the week: “It’s always the biggest of the league fixtures, Munster at home. I think every year there’s always a side story with each game. This one is sort of two teams looking for a bit of form before they go into Europe.”

Never quick out of the blocks traditionally, this latest rendezvous finds both provinces a point apart and outside the play-off positions with two wins and two defeats apiece. Yet on closer examination, of course, Munster’s form is clearly the scratchier.

One accepts the point, made by Rob Kearney as well as Anthony Foley and his players, that the margins have been small and Munster could easily have four wins out of four.

“And the fact that they’re wounded and their backs are against the wall a little bit. They always come out when they’ve been put down,” said Kearney.

He detects that Munster have sought to play more to their strengths, notably with more direct carrying in midfield by Denis Hurley and Andrew Smith, and bringing wingers in more as one-off runners close to the ruck.

The early season schedule afforded Munster three home games out of four, yet they have conspired to lose at home to Edinburgh and the Ospreys, with their wins coming against the Italian pair of Treviso and Zebre.

Leinster performed poorly in their opener in Glasgow, yet nearly won. They played with real depth, width and penetration in an impressive six-try rout of the Scarlets, snatched defeat from the jaws of victory in Connacht and had a decidedly mixed win over Cardiff.

Accordingly, Matt O’Connor makes just three changes whereas Anthony Foley makes seven. Jack McGrath and Mike Ross return to bolster the frontrow, with Mike McCarthy preferred ahead of lock Kane Douglas, who is joined on the bench by the fit-again Isaac Boss.

Encouragingly for Munster, captain Peter O’Mahony returns to a match-day squad for the first time since he underwent a double shoulder operation in April. Hooker Damien Varley is also in line to make his seasonal re-appearance after recovering from a foot injury.

In truth, Munster have made few capital gains against their rivals, not having beaten Leinster in Dublin since their 18-0 success at the RDS in September 2008, one of only two wins in 13 league visits to the city. Ever since, and including, that seismic Heineken Cup semi-final at Croke Park in May 2009 which Leinster won by 25-6, they have won 10 of the last 13 meetings, including all seven in Dublin.

There were a couple of league wins at the RDS in the ensuing 2009/’10 season in regular combat and at the semi-final stage, since when Leinster have won the corresponding fixture at the Aviva in each of the last four seasons, by margins of four, nine, five and four points.

Indeed, while the Aviva has twice been ransacked at European level by Clermont and Northampton over the last two Decembers, Leinster have won all 13 of the league games they have played in both the old and redeveloped Lansdowne Road, beginning with the inaugural league final in 2001/’02.

Gavin Moynihan makes strong start with bogey-free 69 at Austrian Open 20:13
Dean Rock admits ‘less in more’ as he approaches Keaveney’s scoring record 19:46
Leeds go back to the summit after impressive win over Stoke 19:32
Holder shines with the ball as West Indies take control against England 19:23
Club rugby to start back from September 12th on regional basis 18:32
Here is your handy guide to sport on television this week