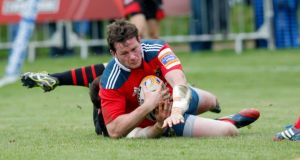 Edinburgh 12 Munster 55: Munster took a giant step towards a home semi-final in the RaboDirect Pro12 play-offs with a comprehensive victory at Edinburgh.

Rob Penney’s Irish side had to come from behind after tries from Carl Bezuidenhout and Willem Nel but they finally clicked into gear and scored seven tries in total to keep themselves in third place, one point behind Glasgow.

By half-time Munster held a decisive lead thanks to tries from winger Andrew Conway and Denis Hurley, with outhalf JJ Hanrahan converting both and kicking two penalties.

Within 15 minutes of the restart, a try by Damien Varley followed by a penalty try gave Munster the bonus point they desired.

Hanrahan converted the first three of the half to give him 16 points, and a perfect place kicking record, while Conor Murray stuck over the final pair.

A Munster team showing 11 changes from the side that lost to Toulon in last week’s Heineken Cup semi-final found themselves immediately on the back foot.

In the ninth minute Edinburgh’s pressure was rewarded with an unconverted try from outhalf Bezuidenhout. It followed good build-up from full back Jack Cuthbert and centre Matt Scott.

Stung by this, Munster produced 10 points in three minutes. Benefiting from a couple of slipped home tackles, they reached the Edinburgh posts where Hanrahan stuck over a penalty.

From the restart Munster swept back upfield led by centre Johne Murphy, who had been awarded a new contract in midweek, and a slick move ended with Conway scoring. Hanrahan converted and put his side into a 10-5 lead with a quarter of an hour gone.

Edinburgh hit back with pressure on the visitors’ line that finished with prop Nel getting over from short range, and this time Greig Laidlaw converted to put Edinburgh 12-10 ahead.

Munster took a single-point lead with a penalty from Hanrahan and, in a momentum changing moment, Laidlaw was unable to match it two minutes later.

Munster upped the pressure in the closing moments of the half. Twice they were turned over by the Edinburgh defence, but in the 40th minute Hurley was sent through a gap and his touchdown behind the posts was converted by Hanrahan, to send his side in leading 20-12.

Munster began the second half with the sniff of the try bonus point in their nostrils.

In the 49th minute the third try arrived when the pack mauled over with the score awarded to substitute hooker Varley, a replacement for Duncan Casey who suffered a shoulder injury after 30 minutes.

Munster resumed their quest immediately, and when referee Marius Mitrea lost patience with Edinburgh’s offending on their line he awarded a penalty try converted by Hanrahan.

Munster were in total control for the remainder of the game scoring three more tries and taking their points total beyond the half-century.

Williams rounded off another fluent passing move with 15 minutes remaining and the Munster scrum forced a penalty score for the second time in the game, with lock Grant Gilchrist sin-binned and Murray converting. O’Donnell then rounded off the win in injury time.

Edinburgh still have a part to play in sorting out the play-off positions as next week they visit current leaders Leinster.