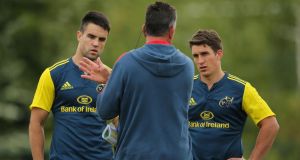 All four sat out last weekend’s home defeat at the hands of a makeshift Ulster selection with coach Rob Penney hoping the quartet bring a cutting edge that was sadly lacking at Thomond Park.

Murray returns at scrumhalf to partner Ian Keatley while Keith Earls makes his first appearance for the province since the Heineken Cup loss to Toulon in Marseille.

Stander, afforded a break last weekend after some eye-catching performances deputising for the injured Peter O’Mahony, comes into the back row alongside Sean Dougall and James Coughlan.

And Botha returns to duty following the birth of his daughter last week.

Glasgow, playing their first Pro12 knockout game on their own patch, will be without Stuart Hogg and Duncan Weir but coach Gregor Townsend insists he is not gambling with the Warriors’ chances by dropping the Scotland internationals.

Townsend’s side have won all of their last eight games and take on the Heineken Cup semi-finalists fresh from thrashing Zebre 54-0 last week.

But the Glasgow boss has sprung a surprise by dropping 11 of the side which walloped the hapless Italian outfit — including Scotland campaigners Hogg and Weir, who fail to even make the substitutes’ bench.

Back issues which have plagued full-back Hogg recently have cost him his spot but erratic form is behind Weir’s loss of the number 10 jersey.

In their place come inexpierienced duo Peter Murchie and Finn Russell but Townsend is happy with his starting XV.

He said: “We have used 36 players over the last three games and the players have responded really well. Most of them have grabbed their opportunities to put themselves up for selection for this game.

“Our last two performances have been excellent and I know that no matter what the combinations we put out on Friday, we would have a strong side.

“Leaving out some of the guys we have is not a gamble. It was a difficult decision but I’m happy with the team we are putting out.

“I’ve watched them in training this week and they look excellent. I believe this is the right squad to face Munster.”