Munster destroy Dragons to keep ahead of the pack 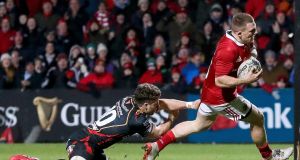 Munster’s Andrew Conway on his way to scoring a try despite the tackle from Dorian Jones of Dragons during the Guinness Pro 12 game at Musgrave Park. Photograph: Tommy Dickson/Inpho

These are heady times for Munster. The Six Nations may be in full swing but a capacity crowd of 8,008 turned out on a freezing night in Cork and were treated to another accomplished display which keeps them top of the Guinness Pro 12 table.

Everything about Munster oozed confidence, the crowd got into it as if it was a big cup match and even with nine away on Irish duty and a few more injured, Rassie Erasmus’s side just had far too much class for the Welsh.

Munster were clinical from the outset, proficient in the tight as much as when they went wide and they had the bonus point wrapped up by the interval when they turned around leading by 31-10.

Dragons offered token resistance early on but they just were unable to deal with the precision of the Munster challenge.

Once again Jaco Taute was central to Munster pulling away, cracking by Adam Hughes after several drives came up short after 14 minutes when Munster strung 18 phases together.

Earlier Tyler Bleyendaal and Dorian Jones swapped penalties but any notion of a tight affair wasn’t long disappearing once Taute got the opening try.

In fairness, Dragons responded well to the concession of that score and looked set to score themselves but Bleyendaal was alert to intercept Tyler Morgan’s pass deep inside his own 22 and after breaking down the right, his kick sat up perfectly for Andrew Conway to race through, hold off the challenge of Jones to score.

A high challenge on Dave Foley led to the first of three penalties to the right corner and the pressure paid off when Taute got in for his second try after Jack O’Donoghue’s initial drive came up just short but sucked in extra cover after 28 minutes.

Dragons hooker Sam Hobbs pulled back a try three minutes from the break with a drive after a penalty to the left corner, with Jones converting to cut the gap to 14.

But Munster had the final of the half. Rory Scannell was stopped short by a lunging tackle from flanker Ollie Griffiths and when Munster went wide, Duncan Williams’s pass to Dan Goggin was knocked forward by Carl Meyer, an act which earned Munster a penalty try and a yellow card for the Dragons fullback.

Bleyendaal made it five kicks from five when he converted to leave it 31-10 at the interval.

Replacement hooker Elliott Dee pulled back a try for the Welsh just before the hour when replacement Munster lock Darren O’Shea was in the bin for a shoulder charge.

However, Munster responded and a break by Rory Scannell set in train a sustained bout of pressure which was finished from close range by loosehead Dave Kilcoyne, with Bleyendaal’s sixth kick of the night making it 38-17.

Munster didn’t take their foot off the pedal but Goggin was denied a try three minutes from time when he stretched over in the right corner, but the referee Mike Adamson whistled it back for a forward pass earlier in the move by Scannell.

But Munster finished in style when Ronan O’Mahony raced through to score another converted try.

OFI chief outlines the likely differences at Tokyo Games 13:45
IOC chief says ‘no Plan B’ and Tokyo Olympics will go ahead 12:56
Nominees announced for RTÉ Sportsperson of the Year 12:47
Fifa warns players not to engage in European Super League 12:02
FAI CEO hopeful Dublin can still host Euro 2020 matches 11:50
Here is your handy guide to sport on television this week