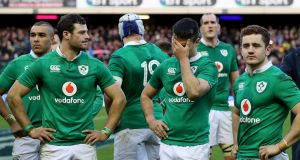 Dejected Irish players at the final whistle in Murrayfield. Ireland were overconfident and did not give Scotland the required respect. Photograph: Dan Sheridan/Inpho

Ninety minutes into last Saturday’s new era of bonus competition points in the Six Nations Championship and the Irish were already sharpening their pencils to do the maths, in the hope the new system might empower the men in green to win the Championship, despite a defeat to Scotland.

With Wales and England both failing to gain a bonus point for scoring four tries, Ireland’s championship is very much alive but – and it’s a big BUT– they have to win and score four tries against Italy and more than likely against France and possibly even Wales.

The winner of Wales and England will be on eight or nine points. Ireland must remain one win away. A bonus point is essential.

After one round the Luddites, who would drag the completion scoring system back into the early 1900s, are searching for The Donald’s “alternative facts”, in the vain hope of refuting the irrefutable. Rewarding teams with an attacking mindset, who score four tries is not an experiment. It has 20 seasons of practical success in the Southern Hemisphere and it is now exciting the North.

Not only did the team not give the Scots the required respect but last week Irish rugby in general was – and I do have use this word – arrogant.

If the English started talking about a possible Grand Slam decider five matches into the future, without even playing the first game, we would all rightly ridicule their arrogance. Last week, Ireland, as a rugby community did just that. I was getting very concerned when large parts of the media were talking about a championship win and not a win against Scotland.

In the week prior to a Test match, players do their best to block the media talk out of their minds. However my experience is that, as if by osmosis, the messages have a way of seeping into the players’ subconscious minds.

You can guarantee Vern Cotter had all the media clippings about Ireland’s disrespect up on the changing room wall.

The first minutes against Scotland showed an Ireland team that was mentally below par. The comeback and the mental readjustment were both entertaining and highly commendable and showed how capable they are of playing very positive, successful rugby.

It also reminds us all of the obvious. Despite defeating South Africa, New Zealand and Australia in 2016, you are only as good as your last game. To give credit where credit is due, Scotland were brave beyond words. That defeat was difficult for Irish hearts to take, but it was a very good outcome for the championship. To have a resurgent Scotland playing passionate winning rugby is very good for the game.

All this is supposing Ireland can win in Rome. The uncomfortable fact remains that Ireland were not good enough and did not deserve to win in Edinburgh.

Now Ireland must focus on the Italian game and not the entire championship.

In Rome only a bonus point win will provide Ireland with the required outcome. The accuracy of both the Irish attacking and defensive systems must be delivered at a higher level than it was in Edinburgh for the full 80 minutes. Firstly, Ireland must secure the victory, then apply the pressure for the bonus point. Italy must be worn down.

At the beginning of the Conor O’Shea era, the Italians are in a period of change and are simply unpredictable. Will the Italian team that New Zealand smashed by 70 points turn up, or will the team that created the historic win against the Springboks be on the field? Will the team that was so dogged and gritty in the first half against Wales run onto pitch at the Olympic Stadium or the second -half team that meekly submitted?

Like with the Irish, the Italian mindset and mental preparations are paramount. The Italians rarely play at their maximum for the full 80 minutes. This is perhaps the first of O’Shea’s many major problems to be addressed. An inability to score multiple tries is perhaps the Italians’ greatest weakness.

The inconsistency of the Italians in the championship makes them a very slippery opponent as Ireland are expected to win easily. The Italians always have one big Six Nations performance in them. The trouble for Ireland is, it could be this week. The Italians cannot be discounted or dismissed.