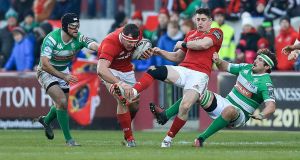 Munster made it five wins in a row and went top of the Pro12 with a comfortable bonus point victory over Treviso at Thomond Park.

Munster have only lost once in all competitions since September and are now undefeated at home since Christmas 2015.

Treviso had won just once in the Pro12 this season against the Dragons, and had not won away from home in the Pro12 since 2013. But they took the lead after nine minutes when outhalf Ian McKinley scored a penalty.

Tyler Bleyendaal cancelled that out shortly after, and then Copeland scored a try for Munster off the back of a scrum in the 21st minute. Munster had taken control at that stage and Bleyendaal’s conversion gave them a 10-3 lead.

Conway struck next when he scored his first try in the corner four minutes later. Bleyendaal missed the conversion but he set up Conway’s second effort just before half-time.

It was a brilliant move, when he connected with Ronan O’Mahony and Conway scored the try. Bleyendaal’s conversion gave Munster a 22-3 lead in the 36th minute.

Munster held that lead until half-time and O’Shea scored three minutes into the second-half but the home side then had to wait until O’Mahony got their fifth try in the 65 th minute, Wootton scored and O’Mahony struck again.