Munster boosted by return of Simon Zebo for Dragons game 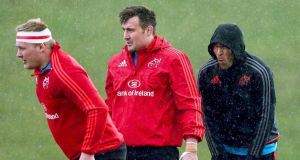 Munster’s bid to kick on into the Pro12 play-offs has been boosted by the return of Ireland winger Simon Zebo for their clash with Dragons this weekend after he was released from Ireland camp by coach Joe Schmidt.

The 25-year-old played 16 minutes in Ireland’s disappointing 21-10 defeat to England at Twickenham last weekend, and took a full part in Munster training at UL on Wednesday.

Tommy O’Donnell and Dave Foley are also available for Anthony Foley’s side following their appearances off the bench in last week’s win over Treviso in Italy, but Keith Earls, Donnacha Ryan and Conor Murray took no part in the session.

Munster have not registered a four-try bonus point in the Pro 12 since October 30th and Zebo’s finishing – he has 41 tries fro 96 appearances – could be a massive asset this weekend.

“Simon, Tommy and Dave are back in with us this week so we just have to find a spot for him in the back three.

“In fairness to young (Darren) Sweetnam, Andrew Conway and Gerhard van den Heever last week, they put their hands up, they are doing a lot of very good things. It’s quite exciting for us at the minute,” said Foley

However, the return of one Cork man has been off-set by the latest injury set-back to fellow Corkonian, centre Denis Hurley.

The 31-year-old has not played for Munster since early January and his season has been dogged by injury with ankle and calf problems.

The Dolphin clubman spent the start of the season on the sidelines with an ankle syndesmosis to his left foot, and he looks set to miss six more weeks after the tear to his calf on the same leg did not heal properly.

Ian Keatley also sat out training because of sickness, but is not believed to be a concern for Saturday’s clash with Dragons at Thomond Park.