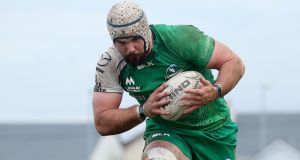 Dublin born Kearney has made 15 appearances for Connacht this season and returns to Leinster having played for the province at junior level, O’Connor said: “Leo Cullen and Marco Caputo have been very impressed with his progress and he has done well over the last number of seasons with Connacht and we think that he will contribute hugely to the set up here.

“He is also a young guy having just turned 24 so we very much see him developing as a player and I think he will benefit hugely from working directly with players of the experience of Devin Toner and Mike McCarthy.”

Leinster are likely to have their squad decimated in the early part of the 2015/16 campaign due to the Rugby World Cup, and tighthead Burke Flynn and loosehead Hirst have been signed to ease the pressure on the frontrow, O’Connor said: “We are very proud of the lads and how they perform for Ireland when away but the reality is that we take a considerable hit.

“In the front row for example we had five of the six Irish front rowers for the majority of the Six Nations with another three, Michael Bent, Richardt Strauss and Tadhg Furlong in the training squad.”

The province have this morning confirmed that 27 players have signed new IRFU contracts to continue playing with the province for 2015/16 and beyond, while with Johnny Sexton they have added a further four players to the squad.