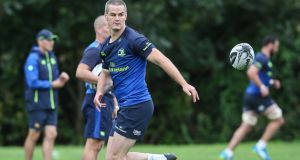 Johnny Sexton: “To see the amount of work that he’s put in to get back fit is incredible.” Photograph: Gary Carr/Inpho

Having successfully integrated a clutch of their Irish front-line players in last Friday’s bonus point win away to Edinburgh, Leinster are set to welcome back Johnny Sexton and Rhys Ruddock for this Friday’s game at home to the high-flying Ospreys.

The timing is good too, given the Ospreys have become the first team in the history of the Pro12 league to take a maximum 15 points from their opening three games, scoring 20 tries and conceding just three in the process.

Admittedly, this has come at the expense of home wins over the Italian duo of Zebre and Treviso, in which they scored eight tries in each game, and a four-try win away to Connacht.

Ticket sales have topped 12,000 for a fixture which has plenty of history, although the only pity is that the planned bus strike for Friday and Saturday will hit the attendance.

Leinster backs coach Girvan Dempsey said Sexton’s return was “really exciting” and gave an inkling as to the professionalism with which the Irish and Lions outhalf has worked his way back from the shoulder injury which he sustained in last May’s Pro12 final which ruled him out of Ireland’s tour of South Africa.

“He’s been in here at six in the morning, doing his rehab and getting himself ready through his sessions. Even in the last week, the energy he brings to the group. So it is, it’s massive to have him back and it’s been really helpful for him to have been around for the whole of pre-season.”

“For a guy who is stepping up in his first season he has matured match on match and we see how he has grown from the pre-season into the league,” said Dempsey.

“You look at his all-round game and he has improved a lot. From a coach’s point of view you don’t have to highlight a whole lot of things to him afterwards. He is very self-critical and he picks up straight away what he needs to work on.”

The word is that Stuart Lancaster has thrown himself into his role as a senior coach with gusto. He assumed control of his first session as the de facto replacement for Kurt McQuilkin as defensive coach within a day of his appointment and contributed to their attack game on the training field as well. If Dempsey has been in any way discommoded, it certainly doesn’t show.

“Naturally, as any coach who’s had the experience that he’s had in international football, he brings a wealth of experience and has been a massive addition to our coaching group,” Dempsey said.

“He’s been great for all the coaches, but also the players have been very receptive straight away and he’s had a huge impact from day one. He’s keen to absorb and learn so much about the club, the group and what goes on around the place through the whole organisation. It’s brilliant to have him on board.”

“You look at their defence and they’re very, very strong, very dogged. They don’t leak much, they’ve only conceded three tries and a lot of the tries that they’ve scored have been a consequence of their defence putting pressure on opponents, forcing them into a poor exit or turning the ball over and them capitalising on that; because they have the talent and the ability to put you to the sword when they turn over the ball.”

On the flip side of Sexton and Ruddock returning, Rob Kearney has rejoined Seán O’Brien, Robbie Henshaw, Richardt Strauss and others on the sidelines. This is due to the strained knee which interrupted Kearney bright return to first-team action.

Leinster are hopeful all will be back in time for the October 8th derby with Munster at the Aviva Stadium or, failing that, the ensuing forays into Europe against Castres and Montpellier that month.