Johnny Sexton may miss next month for Leinster 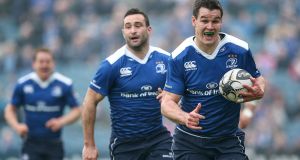 Leinster outhalf Johnny Sexton: “Johnny is just one of a number of guys we are trying to manage back.” Photograph: Dan Sheridan

Johnny Sexton may take up to a month out of the game in order to get his body in the right condition so that it will not break down when he makes a return to play.

After consultation with Joe Schmidt, Leo Cullen has said Leinster will give the Ireland outhalf as much time as is required to ensure that when he makes a return to competitive rugby, it will be for a prolonged spell.

Sexton spent much of this week in the Sports Surgery Clinic in Santry undergoing assessment for his grade one hamstring injury which he sustained when playing for Ireland against New Zealand in the first November Test match in Chicago.

Cullen was asked at Leinster’s RDS base if it could be three weeks or a month for Sexton to get his body right.

“That’s exactly it: just to get his body right,” said the coach. “We’re not talking about Johnny going off and doing the Camino or whatever else people do . . . Yeah, it’s about trying to make sure the next time he comes back and plays, whenever that may be, he’s in the best possible shape.

“Johnny is just one of a number of guys we are trying to manage back. I know there is a huge scrutiny because he is such a key player for Leinster and Ireland.

“We’ve a lot of players in that situation, we make calls on guys saying, ‘they’ll be back in two weeks’, ‘they’ll be following their rehab’ and maybe it doesn’t work out and it maybe turns into six weeks. So, we’re not going to come out and make definitive statements all the time.”

Cullen is expecting Leinster to bounce back from last week’s 38-29 defeat to Scarlets, which brought an end to their six-match winning run. However, they must also do it without Seán O’Brien, who has not quite recovered from the leg injury that kept him out of the game against Australia.

“It was too short so he wasn’t going to be in the reckoning,” Cullen said.

With Northampton and the European Rugby Champions Cup in mind next week in Franklin’s Gardens, all 10 of Leinster’s international players that featured against the Wallabies have been sidelined except for Joey Carbery.

The outhalf, who came on as a replacement for Rob Kearney in the final Test, plays alongside scrumhalf Luke McGrath. Adam Byrne continues on the right wing and will be looking for his fourth try in four outings.

It is a relatively inexperienced team with just eight of the starting 15 having played with Leinster 30 or more times previously.

On the bench, there are Ross Byrne who has played six times for Leinster before, Andrew Porter and Jeremy Loughman three times, Tom Daly twice while Max Deegan and Charlie Rock are preparing to make their debuts.

“When you’re down players, it places another level of responsibility on some of the younger guys. There’s a good few academy guys in our 23 and we’ve had the opportunity to work with those guys over that November period which is good for us as coaches,” said Cullen,

“I don’t want to look too far past Dragons, but if you look at what’s coming up, there are four big European games after that, two and two either side of Christmas with three Pro12 games sandwiched in between over 11 days; we play Munster on the 26th, Ulster on the 31st and Zebre here on the sixth. So, it’s going to be an intense period.”

Leinster have won their last 16 home games in the Pro12 and although the team will line out entirely differently next week, there are openings. Carbery could start against Northampton and depending on O’Brien’s recovery there could also be a backrow opening.