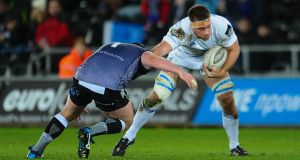 Leinster’s Dominic Ryan tries to evade the tackle of Ospreys’ Ryan Bevington during the Guinness Pro 12 game at the Liberty Stadium in Swansea. Photograph: Craig Thomas/Inpho

Jimmy Gopperth held his nerve to slot a late penalty and earn Leinster a share of the spoils at the Ospreys.

The visitors had looked on course for a valuable win in the battle for Guinness Pro 12 play-off spots when their outhalf kicked them into a 6-0 lead.

But the Ospreys battled back with two penalties and a drop goal from Sam Davies to lead with time running out, only for a debatable late call to allow Gopperth to level matters via the post and prevent his side dropping out of the top four.

It said much about a soporific opening half that the best try-scoring opportunity arrived inside the opening 60 seconds. Ospreys hooker Scott Otten found broke through in midfield, but wasted his good work by not passing to Tevita Cavubati.

When the ball did return to earth the visitors had the edge with the scrum and breakdown proving to be areas of particular strength.

A strong scrum allowed Gopperth to open the scoring, while pressure over the ball paved the way for the New Zealander’s second three-pointer.

While offering little in attack themselves, it allowed Leinster to stymie any flickering of offensive light from their hosts.

It took 39 minutes for Leinster to put together a concerted attack and even then it was ruined by Richardt Strauss bundling into his own man.

It proved a costly error as the Ospreys countered with a twinkling break from wing Hanno Dirksen which forced a three-point chance for Davies, who gratefully slotted the kick.

The young outhalf tied the scores moments after the interval, calmly taking a drop goal to bring his side level.

The Welsh side smelt blood and found some much-needed attacking fluency.

Zane Kirchner was forced to make the try-saving tackle on wing Tom Grabham and the pressure kept coming. A high hit by Rhys Ruddock, allowed Davies to put the Ospreys into the lead. It finally sparked Leinster to life but, having battered away without success, it took Gopperth’s nerveless penalty to save them.