Jared Payne facing eight weeks out after surgery on foot 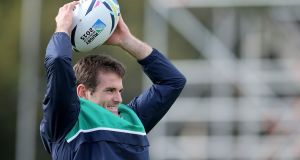 Ulster coach Neil Doak has confirmed Jared Payne has had surgery on his injured foot and may now face a lengthy spell on the sidelines.

Centre Payne was forced to leave Ireland’s World Cup squad ahead of the Pool D decider with France after scans revealed he had fractured his foot during Joe Schmidt’s side’s 16-9 win over Italy.

And now following surgery Doak has suggested the 30-year-old Kiwi could be out for two months, he said: “Jared had an operation. There’s no definitive return point at this stage, like most things with bones.

“And there could be some structural damage down there, who knows? It could be eight weeks, he’s had his surgery and he’s on the road to recovery.”

This means Payne is likely to miss Ulster’s opening European Champions Cup fixtures away to Oyonnax on November 14th and the visit of Saracens to Ravenhill on November 20th.

It would also make him a doubt for the Champions Cup clash with Toulouse on December 11th as well as making him unavailable for a number or Pro 12 games, including the trip to play Leinster on November 27th.

Meanwhile, Doak remains unsure of the extent of Tommy Bowe’s injury which forced him to be stretchered off in the early stages of Ireland’s quarter-final defeat to Argentina.