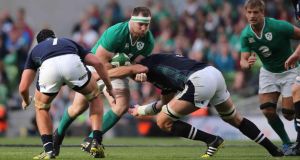 The Ireland management will be keeping a close eye on the performances of Michael Bent and Gordon D’Arcy in tonight’s pre-season friendly against Moseley at Donnybrook (7.30). Isaac Boss, Jack Conan and Fergus McFadden have been included among the replacements.

Irish assistant coach Les Kiss explained earlier in the week that Joe Schmidt and his management team will watch footage of matches involving Leinster, Munster and Ulster in which players released from the Ireland camp will play.

The provinces are facilitating players returning from injury and those who need a competitive environment to sharpen their games. Schmidt will inform the players of the composition of the 31-man World Cup squad on Sunday, 24 hours after Ireland play Wales at the Aviva stadium.

Bent, who twice came on as a replacement in Irish warm-up games against Wales (Cardiff) and Scotland (Dublin), and D’Arcy, who started the Scottish match will both have their performances at Donnybrook monitored.

Tommy Bowe and Andrew Trimble will both play for Ulster.

Kevin McLaughlin returns after an eight-month injury layoff to captain Leinster, while Isa Nacewa is given his first start since returning to the province, in a side that shows 10 changes from that which beat Ulster last Friday.

Meanwhile Munster head coach Anthony Foley has made nine changes to the team for tonight’s visit of London Irish to Musgrave Park. In the pack John Ryan joins Mike Sherry and Stephen Archer in the front row while John Madigan returns to partner Dave Foley in the second row.

There are two sets of brothers named in the match-day squad, Rory and Niall Scannell from Cork, and Bill and David Johnston from Tipperary.