Guinness Pro12: A draw will do for Leinster when they take on Edinburgh

Team will work with what they’ve got, says assistant coach 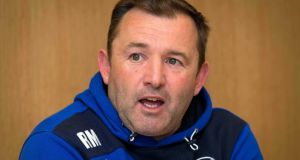 Leinster can’t seem to get away from reminders of their travails in this season’s Guinness Pro12, the latest being their lack of representatives on the team of the season. Ulster’s Craig Gilroy, Rory Best and Franco van der Merwe, Munster duo Tommy O’Donnell and CJ Stander and Connacht’s Robbie Henshaw and Denis Buckley are thoroughly merited inclusions.

There is still a little business to be attended to from a Leinster perspective when they travel to Murrayfield this Saturday to take on Edinburgh, knowing that a victory – a draw would suffice – will copperfasten fifth spot in the league table without recourse to other results.

Murphy confirmed that Shane Jennings should be fit to play against Edinburgh in what would be his last appearance in a Leinster jersey as he retires at the end of the season, but with Gordon D’Arcy and his wife Aoife expecting their first child, he may be excused a trip to Edinburgh.

Darragh Fanning requires a minor wrist surgery procedure. “All the major ones are done. The reports are that they are all progressing well with the rehab,” a reference to Marty Moore, Sean Cronin and Luke Fitzgerald.

“That’s why you have an academy and a strong academy. Those guys are going to have a lot of pressure on them early season when they are going to have to play games. I don’t think there is going to be a massive amount of people [coming in] from outside.

“A lot of those lads have spent time with us over the past couple of weeks. Although they aren’t getting game time at that level we are trying to integrate them into our squad and our way of thinking in what we are trying to do.

“The likes of Garry [Ringrose], Cian Kelleher and Ross Moloney, these guys are in regularly with us and attending the senior meetings. That’s the process we are going through at the moment.”

Pro12 Team of the Season