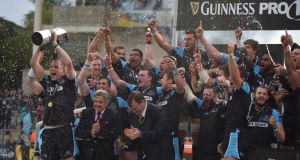 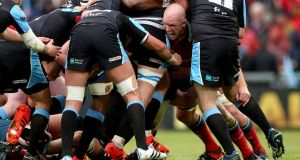 Munster’s Paul O’Connell in action against Glasgow Warriors in the Guinness Pro 12 final at Rvaenhill.

Playing in their second successive final following their defeat to Leinster in the RDS 12 months ago, their only previous appearance in the final of any major competition, Glasgow’s running and off loading game earned them the trophy in front of 17,057 fans at Kingspan stadium.

Four tries from Gregor Townsend’s side, the most consistent team over the course of the season, ensured Munster would play a chasing game. That they did and despite it being Paul O’Connell’s last outing for the club, they never really came close.

Missing key players in Peter O’Mahony and Conor Murray, Munster fell behind after nine minutes and couldn’t catch a more inventive and defensively strong Scottish side.

Glasgow’s first half went almost perfectly for them as they ripped into Munster from the beginning. By nine minutes that pressure paid off when the already threatening Leone Nakarawa drove through the heart of the Munster defence.

Showing scant respect for the red line of bodies, the secondrow muscled to within a few metres short of the try line before off loading to Rob Harley on his shoulder.

Harley fell over between the posts leaving Finn Russell to kick a simple conversion for 7-0. It was man of the match Nakarawa who butchered a try-scoring pass to Stuart Hogg minutes later but the athletic Fijian was challenging Munster every time he took the ball on.

Munster’s best early chance came with a sweeping move midway through the half, the ball ending with Keith Earls on the right. Earls knifed in but was brought down yards short of the line.

Munster, chasing their fourth Pro12 title since they beat Leinster in 2011, finally got on the board from a scrum on 24 minutes with Ian Keatley recovering from an early kick from hand that screwed horribly. His penalty was good and Munster trailed 3-7.

But Nakarawa repeated what he had done for Harley’s try, this time on the left wing. Duncan Williams was brushed aside and with DTH van der Merwe steaming down the line outside him the secondrow accurately off loaded, Keatley unable to stop the winger. Try two.

It was Glasgow initiative and a little magic from fullback Hogg that set up their third try. Hogg accelerated into a gap on the right, drew Zebo and put the free Henry Pyrgos in under the posts, Russell converting for 3-21.

But then Minster did as Munster do as half-time approached and took the ball up field and through the phases, selfless Glasgow defence keeping them out inches from the try line. But the ball was let out left with centre Andrew Smith taking advantage of the limited space.

Referee Nigel Owens went to the TMO for a suspected knock-on but the try was good and Munster were back in the game, 10-21 at the break.

That 11-point gap lasted just 20 minutes as Glasgow continued their running, off loading game. While O’Connell drove over but was held up, it was Russell who extended the Glasgow lead.

As the Scots went through the phases, Munster were sucked over to their right. Russell saw the smallest of openings and he was in for the try and conversion for 13-28 on the hour.

Duncan Weir kicked a penalty for 13-31 on 73 minutes but by that time Munster’s fight was up. Townsend knew it and so did Anthony Foley.

The final scene was Owens blowing his whistle to close the game and delirious Glasgow players pouring off their bench. Munster were beaten and beaten well. There can be no complaints.