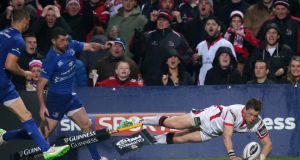 Craig Gilroy dives over for Ulsters second score in their 26-10 win over Leinster at Ravenhill. Photograph: Inpho

Ulster set up a third Irish derby in a row at home to Munster two weeks’ hence, in a match that could decide home advantage in the last four with the final to come here, and in the process ended Leinster’s season.

A win for the Ospreys on Saturday will mathematically extinguish Leinster’s hopes but the die is already cast. The damage had been done earlier in the sesson, and although Leinster started like a train but, five days after going toe to toe with Toulon over 100 minutes in Marseille, they finished like a tug boat.

After an opening ten-point salvo, Leinster retained a sporadic threat which was entirely individualistic, be it the footwork of Gopperth, Luke Fitzgerald or Ben Te’o, but generally Ulster’s aggressive line speed and tackling held the upper hand over Leinster’s running game.

Ulster didn’t have the same individual threat, but generated quicker ball, had better shape and depth and width to their attack, and in Paddy Jackson had the better controller of operations at out-half.

Unfortunately for the players and fans alike on a dewey night which gave way to heavy rainfall, the ball soon became very slippery. Initially, the two teams had shown what might have been possible in an opening quarter played in more favourable conditions.

Ulster’s kicking game was poor and the game had barely begun when Rob Kearney safely fielded an over-cooked box kick by Pienaar to pass infield to Jimmy Gopperth. He put Leinster on the front foot by stepping the first two tacklers and after eight or nine phases he then put Leinster ahead when Iain Henderson didn’t release after the tackle.

Better followed for the visitors, who assuredly needed the early lead more given their exertions of last week, when Ben Te’o further underlined his burgeoning ability in a Leinster jersey after Richardt Strauss picked off a Rory best overthrow and Sean O’Brien out Leinster on the front foot. Te’o took a superb out and in line to pierce the initial white line and then accelerated through the tackle of Louis Ludik to score by the posts for Gopperth to make it 10-0.

A badly sliced crosskick by Gopperth invited Ulster into the game, and although Ruan Pienaar was well short from long range, Paddy Jackson left Dominic Ryan and Gopperth for dead before a Tommy Bowe offload to Ludik led to a huge gap from the ensuing recycle. Henderson charged through for the try, with O’Brien complaining that the referee had inadvertently blocking him.

After Pienaar drew the sides level, O’Brien’s relationship with Lacey soured further. The home crowd bayed at the way Henderson was then dumped on the ground and at the behest of one of his touchjudges, John Lacey went to his TMO Seamus Flannery. O’Brien had lifted Henderson onto his shoulder and then sort of tossed him against a Leinster teammate and onto the ground, with Lacey taking the view that he could have taken more care and yellow carded the flanker.

Ulster opted for the corner, but a knock-on by Henderson relieved the pressure and with the help of one horribly struck penalty by Pienaar from 42 minutes, Leinster saw out the ten minutes without O’Brien without any damage on the scoreboard. Even so, Pienaar gave Ulster a deserved lead after touch judge Olly Hughes decreed Gopperth had strayed offside.

Re-energised by the turnaround, Leinster were further encouraged by big carries by Cian healy and O’Brien, before Chris Henry stymied the attack with the concession of a clever penalty for killing the ball. Leinster eschewed a probable three points to go up the line, but the Strauss throw was picked off by Franco van der Merwe. After a prolonged bout of defending, a crooked throw by Strauss put Leinster on the back foot some more.

Nearing the hour mark Leinster were beginning to look a little heavy-legged. Devin Toner was held up and driven in the tackle and Fitzgerald, socks rolled down, sliced a kick into touch. Ulster sensed their moment, and a wonderful piece of skill by Jackson - jinking out of one tackle and deftly grubbering toward the touchline for Craig Gilroy - almost led to a try but Kearney did enough to shove him over the touch line before grounding.

But the traffic was one-way by now, and when Ludik slipped out of Gordon D’Arcy’s tackle to gallop infield, Bowe was on hand with one of his uncanny support trailers. Kearney was binned for what Lacey considered a professional foul in slapping the ball down at the ruck, and after Pienaar tapped over the penalty he landed a monster effort to make it 19-10 against wilting 14-man opposition.

The inevitable followed when they went through the phases impressively, using the full width of the pitch and working an overlap as Pienaar passed behind a decoy screen to Jackson. He practically telegraphed and gift-wrapped the inside scoring pass for Gilroy, who took a fine line to score.