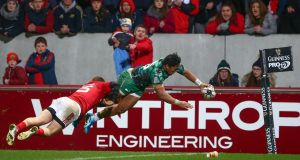 Connacht bridged a 29-year gap (1986) to the last time they won a game against Munster in Limerick in recording a thoroughly deserved victory in the Guinness Pro12 that saw them retain their position atop the table.

Since their last away win in an interprovincial against Leinster in 2002 Connacht have lost 36 matches and drawn one.

They outscored their hosts by two tries to one and survived what appeared a ludicrous – it was certainly contentious – penalty try decision to conjure the perfect riposte with three minutes remaining, when man of the match, Bundee Aki scored in the corner.

Munster will reflect on a lacklustre first half performance, and even though they improved appreciably after the interval, they just could not translate their dominance into a sufficient number of points.

In some respects it was a game of two halves for both sides, Connacht in the ascendancy and Munster hanging on with the roles reversed after the interval. The visitors had a host of outstanding performers but over the 80-minutes it would be hard to surpass the efforts of Aly Muldowney.

The pack fought for everything and also received some important impetus from the bench while Henshaw’s impeccable timing in a grabbing the match defining moment, underlined his class.

Munster too had some excellent individuals performers not least James Cronin, Jack O’Donoghue and Mark Chisholm in what was a highly entertaining match.

There was much to admire not only in the enterprise that Connacht showed in the opening half but the manner in which they intelligently varied the point of attack, working the fringes of the breakdown to good effect as well as working the ball to the touchlines.

Kieran Marmion’s box-kicking was precise, allowing Matt Healy to successfully contest the high ball on a couple of occasions. The visitors also used forwards in midfield to good effect, particularly hooker Shane Delahunt and openside flanker James Connolly, who both injected momentum into the patterns.

If Connacht’s passing was a little sloppy at times, individuals rescued possession with acrobatic handling. Craig Ronaldson’s footwork, Bundee Aki’s strength and Marmion’s eye for an opportunity allowed the visitors to dominate territory, despite playing into a strong wind.

Munster were forced to defend for large tranches of the half, their line enjoyed a charmed existence on a couple of occasions. The collective effort at the breakdown forced crucial penalties both in terms of field position and the momentum that Connacht generated.

Craig Ronaldson kicked an early penalty before O’Halloran crossed for the game’s first try on 17 minutes. There appeared nothing on when the wing received possession just inside the Munster 22 but he slalomed his way through the heart of the Munster pack with a hand laid on him to skate over.

Ronaldson added the conversion but when he was penalised for not releasing three minutes later, Munster opted to go to the corner twice and from the second lineout – Jack O’Donoghue’s athletic take – hooker Niall Scannell dotted down following a well-constructed driving maul. Ian Keatley couldn’t add the conversion.

Connacht continued to play with a nice tempo and width but Munster’s streetwise breakdown work allowed them to force both turnovers and penalties. James Cronin, winning his 50th cap, along with the industrious O’Donoghue led the resistance from the home side, who trailed 10-5 at the interval.

The home side started the second half with greater authority, Keith Earls making a lovely break mirrored seconds later by Robin Copeland but Connacht managed to scramble well to snuff out the threat.

Gerhard van den Heever neat break took the home side in the Connacht 22 but Ronaldson rescued the situation by pilfering possession at a ruck eight metres from the Connacht line.

Munster with their dander up started to play with more pace and width, securing quicker ball at rucks and getting the big carriers, Mark Chisholm, Stander, Cronin and O’Donoghue over the gain-line.

Connacht scrambled well to defy the home side a definitive line breach, number eight Eoghan Masterson poaching a Munster throw after the home side had elected to go to the corner with a penalty rather than taken the straight forward three-points on offer.

The decision looked a little more foolish in the 58th-minute when Connacht captain John Muldoon forced a penalty concession at a ruck and Ronaldson was unerring from 30 metres to nudge the visitors 13-5 in front.

What followed beggared belief, particularly for Connacht supporters. Marmion had a kick charged-down, Munster re-gathered possession and Keatley demonstrated some lovely footwork to beat a couple of defenders and race into the Connacht 22.

As he looked inside for Conway, Muldoon made minimal and marginal contact in terms of a potential early tackle. Whitehouse consulted the television match official Simon McDowell and between them the decided to sin bin Muldoon and unbelievably awarded a penalty try, which Keatley converted to bring his side back to within a point at 13-12.

But with their character questioned – Muldoon had returned at this stage – the visitors delivered a stunning climax, Henshaw stepping inside the tackle of Earls and passing to the supporting Aki. The centre rode Conway’s tackle to score in the corner.

It was no more than Connacht deserved, worthy winners on a famous night for the province and Pro12 leaders.