Connacht show they’re not afraid of getting hands dirty 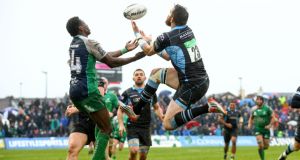 On this rollercoaster of a season generously sprinkled with new landmark wins, Connacht found another way to scale new heights.

As the sun shone and it rained tries elsewhere, here on the Atlantic coast it just rained incessantly, but Connacht rolled up their sleeves and got down and dirty to beat Glasgow for the first time in four seasons.

Discipline, more orthodox exit strategies – one ruck to tee up AJ McGinty for a touchfinder – and a voracious work-rate in defence coupled with their lineout maul as a launchpad for two well-executed tries ended the Warriors’ nine-match winning streak.

Gregor Townsend’s well- grooved outfit looked the stronger side at the start of each half, but Connacht worked their way into each period, double-tackling the carrier as best they could to stymie the Warriors’ offload game and even, eventually to some degree, limiting the rampaging influence of Leone Nakarawa.

“I said this right from when I first came in, I don’t want to be known as a team that runs everything or kicks everything or keeps it up the jumper,” said Pat Lam afterwards.

“It’s about conditions and what the defence gives us. And then that’s up to the players to make the decisions. It comes down to execution.

“We knew the forecast was raining so we’re not silly against a very good defensive team to try to play too much in that area but we needed to put them under pressure. The kick is only as good as the chase and the chase is only as good as your hunger and working together. Then you’ve got guys like Stuart Hogg and [Lee] Jones and [Tommy] Seymour.

“It was phenomenal to see our forwards staying connected, making tackles and then working back on defence. A lot has been said about our defence but when it’s counted in the big games, Munster, Leinster, here today and against Ulster when we were down to 13 men, the boys always step up.”

Acknowledging that this was a huge win for his team, Lam intimated that the challenge of beating Glasgow a second time in a row will be more daunting. “I think everyone was expecting the result would go the other way.

“Not only that we beat them, the way we beat them is what I’m proud about. They’re a phenomenal team. They’re going to come back stronger and as I challenge, the boys, everything we’ve done all season is about our preparation, our day-to-day.

“There is going to have to be another level because they’re going to come back stronger but it’s good that it’s at home and it makes for a great occasion for our fans.”

As Townsend noted, the constant rain and slippery ball made it harder for the teams in possession to shift it along the line with pace, and thus rewarded the aggressive line speed of both defences.

“We were generally pleased with our defence, although there were a couple of lapses around the set-piece area that we’ll have to improve on next time.”

Yet, whether forced to jink infield or opting to, AJ McGinty used his footwork impressively, not least with the half-break and offload for Bundee Aki’s finish to stealthily open the scoring against the run of play.

McGinty out-played the unsure Finn Russell, who missed two kickable penalties, and so too did his replacement, Shane O’Leary, whose pin-point crosskick enabled Tiernan O’Halloran to beat Stuart Hogg in the air for the match-winning try in his 100th appearance.

In Connacht, Townsend can see the shoots of a rejuvenation akin to what Glasgow underwent a few years ago, and he has not been particularly surprised by their progress.

“We have always thought Connacht are a very good team. We always prepared really well for Connacht.

“We had a good record against them until today, but that was because we prepared really well. I always thought their league position didn’t show what they were capable of.

“This year they have got the belief of winning games, players playing international rugby, and they have backed themselves in how they play.

“You have more chance of winning if you keep the ball. We see a lot of similarities – we aim to play positive rugby and it’s a great atmosphere here, as it is at Scotstoun.”