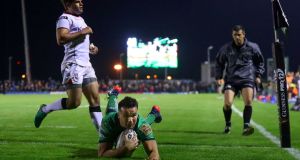 Connacht are back, and how. On a gorgeous becalmed night in the west of Ireland, there was nothing calm about this frenzied and enthralling derby, with the champions continuing to rediscover their mojo as they inflicted a first defeat of the season on the Pro 12 leaders going into the first weekend of European rugby.

So Connacht have finally beaten Ulster for the first time under Pat Lam’s watch, and in the process ended a run of eight successive defeats to their provincial bugbears, whom they had only beaten once in their previous 20 collisions.

And there have been few more thrilling collisions than this one, and certainly none in which Connacht played such daring, high tempo attacking rugby. For this famous win was also a thrilling reward for their insatiable desire and unflinching belief in both their squad and their running game, not least in the face of some superb outside-in defence led by Jared Payne. But those who dared more won.

Indeed, Ulster brought some classy rugby to the party, with Tommy Bowe growing more and more influential as the night wore on, but in a largely even, to-and-fro game, Connacht perhaps also had the more inspired individuals, be it young hooker Dave Heffernan, the outstanding Cian Kelleher or Tiernan O’Halloran.

Significantly, fears over the absence of such stalwarts as Tom McCartney and Kieran Marmion were quickly dispelled. The latter’s replacement, Caolin Blade, found the former’s replacement, Heffernan, with a lovely long flat pass bypassing the closer targets, enabling the hooker to fend off Robbie Diack with the game’s first scampering break.

Better still, Blade then left two men in his wake with a snipe up the guts, and after a good carry by Eoin McKeon, Jack Carty showed lovely footwork to dance untouched in under the posts.

Soon the penalties began to flow, Paddy Jackson opening up Ulster’s account, and as they slipped into their smooth running rhythm the Clan Terrace and the rest of a vibrant 6,184 full house roared their approval as Jake Heenan, Kelleher and Conor Carey all won turnover penalties over the ball.

Their second try was vintage Connacht, madcap at times but always trusting their skills. When Payne’s tackle on Craig Ronaldson forced a spillage, O’Halloran retrieved the ball, John Muldoon then linking brilliantly with Heenan on one flank, before O’Halloran’s long floated pass enabled Kelleher to step Tommy Bowe and score on the other.

From, Jackson’s restart Andrew Browne cleverly tapped wide to Kelleher, who thrillingly broke free, offloading to the supporting James Connolly – on from the eighth minute for McKeon. Blade and Heffernan took it on, and although O’Halloran was tackled before offloading to Muldoon on the right flank, from the recycle Connolly arrived at full tilt to take two tackles and score off Blade’s pass. Carty converted for a 19-3 lead.

A succession of four penalties as Ulster repeatedly went to the corner culminated in Carey being binned. The double whammy was duly completed despite Ultan Dillane disrupting the fourth Rory Best throw, Darren Cave putting them on the front foot before Paul Marshall’s long floated pass put Craig Gilroy over.

Even then, with 14 men, Bundee Aki won the ball from Bowe in the air for Kelleher to put Connacht on the front foot and when Carty carried strongly Iain Henderson was pinged for not rolling away and Carty made it 22-8 at the break.

However, on the resumption, Connacht’s oft-debated exit strategy led to successive turnovers. The first saw Ulster go to the corner and maul over for a try by Best, the sixth of his career against Connacht. Then from off the top ball, Bowe charged through a gap between Heffernan and Heenan, and his pass put Payne over. And just like that it was 22-all.

But, just like last season’s run-in, Connacht slipped back into their systems. Going wide right for Niyi Adeolokun to free Heenan, then scoring an almost trademark try as the rumblers sucked in the Ulster defence through the phases before Carty went out the back to O’Halloran and get round the defence, Ronaldson putting Kelleher over for his second try. It was also their first ever bonus point try against Ulster in the League.

When Peter Browne didn’t support his own body weight, Carty made it 30-22. But as the game continued to ebb and flow, Jackson trimmed the lead with a penalty awarded harshly against Ronan Loughney for going off his feet, and then went to the corner after Marshall and Bowe ran it out from deep, and ensuing penalty for offside.

They went through the phases and Jackson broke through but the try was rightly over-ruled for blocking by Rob Herring on Ronaldson. More contentiously, the young Ulster replacement prop Ross Kane was binned for a shoulder charge off the ball on Dillane.

There was still more drama as Ulster sought to steal it from their own half. Connacht don’t do dull anymore, and this awesome match throbbed to the end as Connacht kept Ulster at bay before a final turnover led to O’Halloran hoofing the ball into a raucous Clan Terrace.