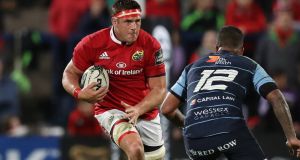 Munster’s CJ Stander in action against Cardiff. “That game is always going tohang over us.” Photograph: Billy Stickland/Inpho

Thomond Park may not be heaving at the seams when Munster make their seasonal reappearance there against Edinburgh at 3pm on Saturday. Nor will it be when Zebre come calling seven days later in a clash with the All-Ireland football final replay.

But be that as it may, Munster need to start making their Limerick citadel a fortress again.

Last season a mid-season slump which saw derby defeats to Connacht and Leinster either side of a European Champions Cup loss at home to Leicester went a long way toward Munster’s failure to reach the knock-out competitions of both tournaments. Indeed, win those three and they would have done so.

Coupled with a defeat to the Ospreys in Musgrave Park, it left Munster scrambling to achieve a top six finish and qualification for the European Champions Cup, which they did by holding their nerve with bonus point wins at their twin homes against Saturday’s opponent and the Scarlets.

The defeat in Cork to Cardiff two weeks ago ups the ante against Edinburgh, as CJ Stander readily accepts.

“We kept on saying last year that you want to make your home a fortress and win all your games and we couldn’t.

“So that [Cardiff] game is always going to hang over us, to use as an example, that feeling we had after the match, just in the way we didn’t use our opportunities.

“It was not ideal at all to lose that, but it was an opportunity to know what we did wrong, and where we need to be going into a game like this this weekend.”

“We want to make Thomond Park and Irish Independent Park a fortress. We slipped up the first night but, hopefully, this weekend we can step up and change that.”

Edinburgh will be a good litmus test for this injury-depleted and evolving Munster side, not least physically. “Because they’ve got a South African backroom team. They’ve been taught to be physical” says Stander, of the Alan Solomons coached team.

“Everybody says about their physicality, and that’s what we expect from Edinburgh. Their forward pack are very physical, and if your maul is not set or your lineout is not on par they’re going to take your ball away from you. Their scrum has the starting front row for Scotland the last few years, and a guy like WP Nel is class in his position, so we have to look after all those aspects.

“They’ve got their physicality but also if you give them space and let them use the ball they’ll use that and make it tough for you. The year before last, 13-14, a game like that, if you don’t match them physically you’re going to be in trouble. That first five minutes is big.”

Munster are now being directed by a director of rugby and defence coach who are both South African, and Stander speaks glowingly of his compatriots.

“What’s impressed me the most is his knowledge of the game, he knows the game inside and outside. There’s stuff he knows about the tactical side of games – he made a bet with us earlier in pre-season, I think it was about the Super Rugby final. He gave us a stat and he said ‘this team’s going to win’ and it happened.

“So the knowledge he has off the pitch, in the statistics and what you need to do to win a game, that impresses me the most. And the way he handles the people he works with, him and Jacques [Nienaber], they were straight in, fitting like a glove. I knew that was going to be the case but it’s good to see that it’s working.”

“He’s a great guy. He’s always up for a laugh but when he’s serious he’s serious. He brings a bit of toughness into the team. He talks straight, he uses harsh words sometimes and that picks up the boys a few times. He knows his defence. He knows rugby and it’s good to have him in the side.”

Stander admits Nienaber is different from any other coach he has worked with.

“He brings an X factor to the thing, the way he talks. He’s passionate. He’s the most passionate man I’ve ever seen about defence and rugby in general.

“Like Rassie he’s a straight shooter, tells you exactly what to do on the weekends and if you don’t do it he tells you at half-time or whenever he gets the chance, ‘you’re not doing it’. So you want to step up for the man.”