Brian O’Driscoll on target for final farewell in RDS 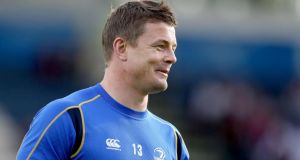 The long goodbye is set to have its final outing. Helped by a two-week break, Leinster coach Matt O’Connor is confident that Brian O’Driscoll will go through the return-to-play protocols and take his place in the RaboDirect Pro 12 final against Glasgow at the RDS on Saturday week.

O’Driscoll’s head collided with Iain Henderson’s hip in the 49th minute, laying him out on the ground for almost a minute-and-a-half before he sat up. He was able to exchange a quip with the Ulster lock and maintained he was fine, but O’Driscoll reluctantly left the field at the behest of team doctor John Ryan.

Perhaps the decisiveness with which players were removed was due to the fall-out from the Florian Fritz incident last week, when the bloodied and dazed Toulouse centre was brought back on field by Guy Noves for the last five minutes of the first half after 16 minutes off the pitch. A groggy Fergus McFadden, after putting his body in the way of Roger Wilson, and Seán Cronin, in his 30th game of the season, was also hauled off, but Dave Kearney was the biggest concern after his left knee was trapped under the body of Jared Payne, evidently leaving him in severe pain. This places a doubt over his participation in the tour to Argentine, the squad for which will be announced this morning. It is anticipated that Cian Healy, Sean O’Brien and Sean Cronin will be rested from the tour, as might one or two more of the experienced players such as Gordon D’Arcy.

Player welfare
“There were three or four calls that John had to make,” admitted O’Connor. “They are very experienced, the medical team

Asked whether O’Driscoll had suffered concussion, O’Connor replied: “He got a bang on the neck and he is . . . being assessed now; we will see about that later.”

Dave Kearney’s knee was due to be scanned. “We will see how he ends up,” said O’Connor. “The rest of the boys are all right,” he said, including McFadden.

As was the case for the Leinster-Ulster final at the RDS last season, each club is entitled to a 50 per cent split of the 18,000 tickets, although the expectation is that Glasgow will take up about 4-5,000, with the remainder then to be sold by Leinster. Tickets will go on sale from midday today, with Leinster initially selling to their season ticket holders before a general sale next Friday. The final has the pairing it deserves, with first at home to second in a reprise of the last two semi-finals at the RDS – which Leinster won 19-15 and 17-15. As this testifies, the margins between the two are growing smaller – Glasgow winning 12-6 at Scotstoun in September and Leinster winning 28-25 at the RDS in March – and this will be their 11th meeting in three season.

Leinster are the only Pro 12 side with an unbeaten home record this season, having won all 14 matches in both competitions at the RDS venue this season (their one home defeat coming at the Aviva against Northampton). They have won 12 out of their last 13, while Glasgow’s semi-final win over Munster was their ninth in a row.

“Glasgow are a good side, they’re the form side in the competition to be fair, certainly since Christmas they’ve been very good,” said O’Connor.

Leinster’s injuries reflected how deeply they had to dig in to subdue Ulster in Saturday’s entertaining semi-final by 13-9 to reach a fifth consecutive final, and O’Connor admitted their vast reserves of big-game experience was critical.

Good leaders
“Yeah, definitely and you get put into that position, even the guys in the development of the squad get to see and feel it in a preview/review scenario, when you’re talking about all the things that might and might not go wrong. There’s a big learning part of that. And the bench was big, we got pretty good leaders across the park in that regard and the whole 23 of them were very special.”

Ian Madigan’s match-winning performance off the bench was a further indicator of this winning culture and strength in depth. “He was very good when he came on,” said O’Connor.

As with Leinster winning the League and Heineken Cup in 2008 and ’09, Mark Anscome agreed that Ulster have to cross that threshold, but while admitting this ranked “right up there” in their catalogue of ones that got away, was unsure if this was a mental problem.

“I don’t know if it is that. The biggest thing we have got to take on board is keeping composure under pressure. You might create and build up some pressure on teams but it’s not enough for 20/30/40 minutes.”