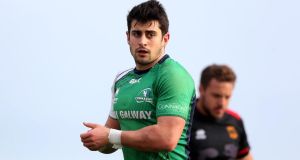 Tiernan O’Halloran will make his first Connacht start of the season against Bennetton Treviso on Sunday. Photograph:INPHO

Anthony Foley has made seven changes for Munster’s Pro 12 fixture against Glasgow Warriors at Musgrave Park on Saturday night.

Denis Hurley is set to lead the province for the third consecutive game, while John Ryan, BJ Botha and Eusebio Guinazu all come in to form a new look frontrow.

Jack O’Donoghue and Sean Dougall come in to join CJ Stander in the backrow, and Ronan O’Mahony and JJ Hanrahan start in the back three alongside Andrew Conway.

Ian Keatley resumes his outhalf duties, while Keith Earls continues is comeback in the centre.

MEanwhile Connacht boss Pat Lam has made two changes from the side which beat Newport Gwent Dragons at Rodney Parade last Sunday for this weekend’s visit of Benetton Treviso.

Tiernan O’Halloran will make his first start of the season from full back while Niyi Adeolokun starts on the right wing, meaning Danie Poolman shifts to outside centre and Craig Ronaldson to outhalf.

Ahead of the encounter at the Sportsground Lam said: “After two good performances off the bench, Tiernan (O’Halloran) certainly deserves his start on Sunday. He brought a lot of intensity when introduced in the last two games and his leadership and communication skills are a big asset in a very young back line.

Mils (Muliaina) was close to playing this week but we decided not to take the risk and so Niyi (Adeolokun) gets his opportunity on Sunday.