Anthony Foley confident Munster are ready to bounce back 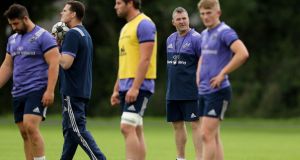 Anthony Foley: happy that Munster will operate from one training base now, the University of Limerick. Photograph: Ryan Byrne/Inpho

Anthony Foley wasn’t consulted or involved in the process last April that pre-empted an announcement that Johan “Rassie” Erasmus was to become Munster’s first director of rugby, thereby superseding in seniority Foley’s role as head coach.

A stilted press conference ensued but the kerfuffle surrounding the genesis of the appointment appears to have dissipated. Foley is part of the coaching team working under Erasmus and this week outlined the specifics in his change of circumstances.

“A few of the responsibilities have changed. Rassie’s view is long term; my view is short term. My view is basically the preparation for the games that are coming up, looking at the opposition, making sure that the tactics we’ve set out are adhered to. And then within all of that, I’ll look after the lineout and the breakdown.”

Munster’s struggles on the pitch over the past couple of seasons have been well documented. They have fallen short of traditionally high standards. No one felt that disappointment more acutely than Foley.

“Pressure, it all depends what type of pressure it is. I think at times you lean on people a lot for sounding boards or whatever. Having experience around the group now, Jacques [Nienaber, the new defence coach] is coming off the back of a series win against Ireland and has coached at international level.

“Rassie is coming off working with the South African union. They’re coming from places with a lot of experience and a high level of rugby. It’s good to have people like that in and around Munster. It’s great that they’re sharing their experiences. We’re all learning and we are all getting better.

“There are definitely changes, tweaks but they’re tweaks that make sense. From our point of view, it’s around winning rugby matches. I’m fully aware that you can play whatever type of rugby you want but if you’re not playing a brand that’s going to win you games and win your supporters back, it becomes self-defeating.”

Foley offers an interesting analogy when discussing falling attendances at Thomond Park and Musgrave Park, pointing to an experience of going to watch a struggling Manchester United playing Sunderland and noting that the fans still got behind the team in a full stadium.

“There needs to be a positivity, needs to be a connected view around supporting Munster. If it’s not the team you support, it’s the club you should support. The team on the pitch will ebb and flow, because that’s the nature of sport. There’s no team ever who has been successful decade on decade. The club is the history, the thing you should follow and that should be the passion you have.”

In casting an eye back over last couple of seasons, he reflected on the issue of losing matches at home that cost the club dearly in both Europe and the Pro12. “How do you win your home games? It sounds stupid, but it’s to get your best players on the pitch and win your home games. It’s a lot easier said than done.

“We can’t or won’t have the biggest squad. We’re then reliant on bringing players through our academy and I think we’ve done that quite well: Darren Sweetnam, Rory Scannell, Dave Johnston, Jack O’Donoghue, we have these fellas coming through.”

Foley enthuses about a decision that Munster will operate from one training base, the University of Limerick, rather than two in Cork and Limerick and offers a rueful smile when conceding that the province has been talking about it in his estimation since 2003.

“The volume of work you get done, the constant interaction; you talk to people over the phone and it’s not the same as meeting them in a room one-on-one. Having that and having less time on the road wasted – we’ll only see the benefits of it in performances over the next period of time.”

The young players are a year older and will have to draw on the experience of last season and ensure that mistakes, the prerogative of the young, are not repeated.

“There are a lot of young guys there with a lot of good enthusiasm and a lot of goodwill within the squad to do well for one another. If that can translate onto the pitch, I think we will be a hard team to beat.”