Peter O’Mahony relishes chance to get back in Ireland team 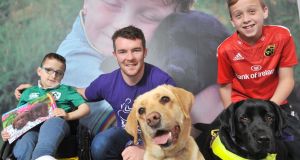 Peter O’Mahony launches the Dogs for the Disabled calendar 2017 with clients Cian Hennessey (8) from Togher and Darragh O’Regan (12) from Mallow. Photograph: Daragh McSweeney/Provision

It was akin to leading the witness. How unhappy are you to be unhappy about missing out on Ireland’s victory over New Zealand in Chicago?

Peter O’Mahony obliged with good grace, outlining his natural disappointment but his response was devoid of self-pity. Preoccupied with helping Munster to a brilliant 33-0 win over the Ospreys in the Guinness Pro12 last Friday night, he then settled down at home on Saturday to watch his erstwhile Ireland team-mates achieve a historic milestone at Soldier Field.

He was exercised by what unfolded to the point where he morphed into a passionate Ireland supporter. “There is nothing much I could do apart from being thrown out of the house for shouting and roaring,” he says.

O’Mahony last played for Ireland in the 2015 World Cup and has shown a great deal of mental and physical fortitude to rehabilitate from a serious injury.

The timeframe was variable, there were good days and bad, but even when he returned to Munster colours, it was always going to be a tight squeeze to amass sufficient match minutes to make the plane to Chicago.

He described Ireland’s triumph over the All Blacks as “fabulous” and understood why Ireland coach Joe Schmidt pursued a different option.

“It takes a couple of hours to process but you trust in your squad, in the staff and all the people looking after you; there are reasons behind it,” O’Mahony says.

“I haven’t played for Ireland since France in the World Cup, so I have missed a lot of big occasions. It’s tough to watch all of them so for me fingers crossed if I can get involved in the squad; it could be the best thing that could happen for me this week.”

“Look, with the nature of me coming back over the last couple of weeks, I’ve been building and getting game time under my belt. I did that again last weekend and now I’m lucky enough to be back in an Irish set-up and I am relishing the opportunity of possibly getting a jersey this weekend against Canada.

“I am always a proud Irishman and they are the days you want to be involved in. Whether you are beating the All Blacks or making your debut against Canada or winning your 70th cap against them, they are all special in their own way. And certainly it is not something I take for granted.”

Ireland’s tribute to the late Anthony Foley, the players standing in the figure of eight, was a gesture that O’Mahony appreciated; he knew nothing of it beforehand.

“It [Foley’s death] does put things in perspective. Look, it had a big impact on everyone, but it was special to see the way that the guys reacted at the weekend, with what they did before the game and what guys have done, and not just for Munster but the other provinces in the last few weeks. And the performances they have put in.

“It has been very humbling to see and good to see that, outside of your professional battles, there is a huge amount of professional respect there between provinces and guys who come into this squad. It is a game at the end of the day.”

And the next comes on Saturday, when he’s likely to be a leader in every respect.

1 Owen Doyle: Creeping professionalism of schools rugby a threat to the game
2 Gary Neville in Qatar an exercise in semi-journalism
3 Jürgen Klopp insists Liverpool title party is not on his mind
4 Darcy Graham ruled out of Scotland’s clash with Ireland
5 Investment in our Olympic hopefuls may be costly – but it’s worth it
Real news has value SUBSCRIBE