Leinster winger accepts rugby is getting physically harder every year 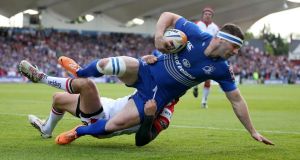 Fergus McFadden in action against Ulster in the Pro 12 semi-final where he had to leave the field with a head injury. Photograph: Dan Sheridan/Inpho.

match against Racing Metro, blood trickling from his head.

Both Smith and Fritz returned to play with fans on message boards in France hailing the Frenchman as a warrior for his bravery. In the cold light of day the overriding emotion was one of horror that Fritz was allowed to return.

It seems for every step forward the IRB takes with concussion protocols, one incident – in this instance triggered by the venerable Toulouse coach Guy Noves – hauls the game back into an unwanted past.

In France it was distressing but with Leinster last weekend a delicate path was walked in the RDS, when Sean Cronin, Brian O’Driscoll and Fergus McFadden were taken from the pitch with less serious injuries than Fritz. O’Driscoll remonstrated but he was removed and was not allowed to return.

McFadden has been concussed before but he was not last weekend. The issue of duty of care by Leinster doctors towards players was shown to be high priority. But for every McFadden and O’Driscoll escorted off, a Fritz or Smith pops up to again queer the pitch.

“I took a bit of a knock to my head and was taken off more for a precaution,” says McFadden.

It didn’t look that way but doctors know better than couch potatoes.

“I’ve been okay the last couple of days . . . I’ve taken it easy in the Irish camp and I wasn’t symptomatic when I ran around. No I wasn’t (concussed), according to the doctors anyway. It was just a knock on the head and obviously the protocols these days are pretty sensitive around that area.” Good news Good news for the player and his involvement in the Pro12 final against Glasgow. But like most others in professional rugby McFadden takes the issue as a fact of life, not lightly but as an inevitability. It’s clear, too, that he doesn’t overthink the new IRB ruling that has extended suspected concussion bins to 10 minutes from five.

“Listen, the collisions are pretty big in the game these days,” he says. “Concussion or no concussion, you get knocks to your shoulders, your neck, your head in every game and it’s wear and tear and you kind of get used to it.

“But it’s like a boxer. You end up getting used to taking those collisions. I got a knock to the head but thankfully it wasn’t too bad and it hasn’t been diagnosed as concussion . . . It would be frustrating if you were down ten minutes in a game and you weren’t concussed. That’s the only thing I’d say.”

Its easy to see where pressure reverts back to the doctors from the players even if there is risk and that is why doctors are there, to protect players from their competitive instincts. The Irish winger is no different from anyone.

“You look at someone like John Fogarty, who I played with in my first few years at Leinster. He probably had another three or four years left in his career and he had to retire, “ says McFadden.

“He was getting headaches and there was a period of time when it was pretty bad, he couldn’t sit in a room with bright lights and he wasn’t sleeping. He had to retire off the back of that. So yeah, there are scary cases but you can’t think about it too much. You get on with it. I love rugby for the physicality and the collisions and this just comes as part and parcel of it.”

McFadden understands the trends. There is less protective shoulder padding in evidence because the players “build up muscle mass.” In a cycle of attrition and wear they get hit on a Saturday and are “sore until Monday or Tuesday.” An eye opener The collisions every year, he says are getting “heavier and worse” and all players can do is “adapt and go with it.” Concussed twice, he says “there are not too many players you’d come across who haven’t been concussed.”

McFadden says the Fritz incident was “an eye opener” but if he thought about it too much he might “hand in his notice.”

He’s a modern player, who last week helped Leinster win their semi-final. It was noticeable too that the team doctors were in the trenches with them.