Nicking titles has long been a favoured Caledonian pastime

If Lions were picked now, Stuart Hogg, Finn Russell and Jonny Gray would have a seat 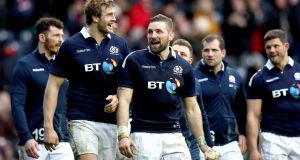 The tartan endgame is straightforward enough. Scotland need only beat England at Twickenham on Saturday, defeat Italy with a bonus point the following weekend, pour out a generous whisky and wait. Like an early clubhouse leader in the Open, they would be sitting pretty on 18 points, potentially enough to win a first Six Nations title should England fail to escape the Dublin equivalent of the Road Hole bunker. Nae pressure, lads.

The golfing analogy, at least, is a promising one: the last Scottish golfer to win the Open was Paul Lawrie at Carnoustie in 1999, the same year Scotland secured the last-ever Five Nations trophy. That season the Scots lost 24-21 at Twickenham but conjured a glorious victory over France at the Stade de France, making England pay for their final day stumble against Wales at Wembley. Nicking titles from beneath more fancied noses has long been a favoured Caledonian pastime.

Assumptions of glory, regardless of the outcome, have never been a part of the equation. In 1984, before Scotland’s grand slam decider against France, the locals were so pessimistic a couple of us penniless students were recruited to sell consolatory Triple Crown souvenir brochures outside Murrayfield on matchday. Les Bleus were a great side, with a widely-feared pack, so there was a semblance of commercial logic. Then again, you try convincing thousands of Braveheart extras to buy a glossy magazine flagging up the likelihood of imminent defeat. After Scotland had won courtesy of Jim Calder’s unscheduled line-out flop, every step of the long walk back to Edinburgh’s Old Town beneath a teetering stack of unsold, irrelevant brochures was a painful lesson in life.

A similar shortage of national optimism was evident ahead of 1925, that distant peak when Scotland won what was to be their only grand slam for 59 years. Then as now it had been 18 years since they had won an outright title and England were the dominant force. These were still the days when dribbling the ball was viewed as a key skill – “Feet, Scotland, feet!” – and the first international of the season against France took place at Inverleith prior to a move to the grander new setting of Murrayfield.

The final game, against England, at their new fortress on a fine, sunny March afternoon turned out to be a humdinger. John Wisden’s Rugby Football Almanack suggested “there was not a dull moment from start to finish” with a late drop-goal helping Scotland to win 14-11. The Scots had a particularly sharp backline, both in thought and deed; of the 17 tries they scored during the championship, 14 came from their wingers Ian Smith and Johnny Wallace.

All of which begs a question now being posed with some regularity: where does the present, fast-rising side – ranked fifth in the world – sit among Scotland’s best teams? The 1990 grand slam side must clearly be up there but, in retrospect, they had fewer legends – Gavin Hastings, Gary Armstrong, John Jeffrey, Finlay Calder – than the 1984 line-up containing Ian Milne, John Rutherford, Roy Laidlaw, Colin Deans, David Leslie and Alan Tomes. Rutherford always reckoned that somewhere between those two eras lay the best team he ever played in, not least because the coaching was routinely sharp. Derrick Grant, Ian McGeechan and Jim Telfer were well ahead of the game more often than not.

Some of the rugby played in the 1970s when Andy Irvine – 5ft 10in tall and 12st 8lb for those comparing him to today’s backline fliers – Jim Renwick, Ian “Mighty Mouse” McLauchlan, Sandy Carmichael, Gordon Brown and McGeechan shared the same dressing room was just as beguiling. Their only crime was to be born slightly too early, in an era when Wales and France were ferociously hard to beat.

In 1925, too, there was a smattering of genuinely outstanding players – the full-back Dan Drysdale, the aforementioned Ian Smith, the centre Phil Macpherson – surrounded by others swept along in the slipstream of their example. According to one eyewitness account of the time, five of the pack could run the 100 yards in under 11 seconds; nine Scots, including Drysdale and Smith, toured with the British and Irish Lions in 1924.

Maybe that, in addition to the events of the next fortnight, will be the true gauge of how far this current Scotland team still has to go. Kenny Logan reckons this is the best side to wear the thistle since 1999 and, if you were picking a planeload of 2017 Lions now, Stuart Hogg, Finn Russell and Jonny Gray (all aged 24 or under) would definitely have a seat. Tommy Seymour, Alex Dunbar, Richie Gray and Huw Jones would all be on standby and, fitness permitting, Greig Laidlaw and WP Nel would also be in the lounge.

If there remain sizeable question marks over their scrummaging, Glasgow’s steady improvement at European club level indicates this generation of Scots can still find other ways to win. For now the Triple Crown chasers of 2017 still lurk in the shadow of their illustrious predecessors but time is on their side.

1 Reality Bites – Tales from the new normal: Caitríona Cormican
2 A beautiful, happy accident - Moneyball is the best sports movie ever
3 James McClean still failing to learn his own online history lesson
4 Matt Williams: We all need a bit of Bud Maher’s resilience right now
5 Ian McKinley: ‘You do take for granted the simple things in life’
Real news has value SUBSCRIBE