Munster’s bravery not enough as Toulon march on 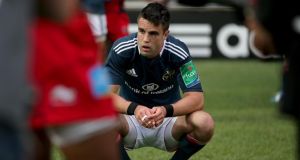 It was the occasion and the contest that this fantastic competition merited after Saracens’ bloodless coup at a hollow Twickenham the day before, if not quite the setting nor indeed the outcome Munster cherished. Instead, another one got away which left Rob Penney with a hollow feeling after Toulon eventually outmuscled Munster 24-16 in the Stade Velodrome. He assuredly wasn’t alone.

Once again you were left to wonder what this competition would ever have amounted to without Munster. In a stadium on which one stand was a building site, their budget and their support was dwarfed by Toulon, yet the Red Army seemed well in excess of the anticipated 7,000 amongst the raucous sun-drenched 37,043 crowd.

And in time-honoured fashion Munster left nothing of themselves in attempting to upset the odds in a ninth away semi-final out of 11, and seventh away to a French side in seven different venues. So the last Heineken Cup final in Cardiff on May 24th will be an Anglo-French Big Bash, heavily infused with South Africans and other imports.

Sole try
Munster’s heroism and effort could, naturally, not be faulted. As against Clermont last season, they doggedly clung to the ankles – literally on some occasions – to overcome an error-strewn, penalty-dominated first half and come within a kick of the lead after Conor Murray conjured the sole try of the game for Simon Zebo against French opponents who expected to win and appeared rattled when not all went to script.

They will rue one long-range missed penalty by Ian Keatley which followed and, given it was his only miss of the day, their decision to go to the corner rather than make it a five-point game in the 72nd minute. In the final analysis though, they also made too many mistakes and conceded too many penalties (12 to eight) for their own good.

“Small margins at this level, small margins,” lamented Penney. “Goodness, we just made so many mistakes both sides of the ball. We showed a lot of courage at times to really get back and support each other when they made some breaches on the back of our errors. Just our skill level wasn’t where it needed to be.”

When asked to describe his emotions, Penney said: “Very hollow would be the emotion. I’m hurting for the boys.”

As for the fateful 72nd minute decision to go to the corner, Penney was, understandably, not of a mind to criticise his captain Damien Varley or the other leaders in the team.

“We’re all fantastic and have 20-20 vision after the event; like if we had scored from a maul, and our maul has been going great for us. We knew Toulon would be very difficult there. We’d scored one early through a maul and in this instance unfortunately even though the maul didn’t work, Toulon did a great job to disrupt but we still have possession, went through two phases and turned it over again. . .

“If we had taken a shot at goal, potentially we go back, we receive a kick off, we have got to go and work our way back up into their half . . . there is no exact science to this and we were very comfortable with the players’ decision making in that regard.”

Other regrets would not go away. “I thought we set ourselves up and got ourselves into really good positions and then we would make an error. Goodness, we thought we might get two or three clear opportunities. We ended up with five or six and we probably took Simon’s one. That is the frustration. The boys prepared really well and they had petrol in the tank but for some reason collectively we didn’t quite have the accuracy. Everyone made just one slip up across the park and collectively it adds up to a lot.”

Momentum shift
The performance of Wayne Barnes will again rankle, particularly penalising Munster at the first three scrums; first just two minutes in under the Toulon posts. “That’s a big momentum shift,” admitted Penney. “If that scrum had been able to go to fruition, may have been three, five or seven points for us at the other end given the proximity to the try line. They do hurt you. The penalty count, there’s a number of penalties that were legitimate.”

Simon Zebo seemed almost close to tears as he reflected how this defeat seemed more frustrating than last year’s 16-10 semi-final loss to Clermont. “Probably more so because last year was a bit of the unknown and this year we knew what we were going into and we felt that we had a great belief in the squad throughout the week and I felt that we were capable of getting a result. It’s just a hard one to take.”

How much longer Munster can continue to defy the financial muscle of French heavyweights such as Toulon without seriously increased monetary firepower of their own remains to be seen. But Penney will depart optimistic for the province’s prospects of remaining competitive on the redesigned European stage.

“I think we’ve proved two years in a row that we’re certainly capable of competing with them. All you just need is a little bit of the rub of the green. Like if we had that game at home, at Thomond Park or at the Aviva, I’m sure we would have been talking about different things.”

Munster have been good for the Heineken Cup alright, but at times the cup has not been kind to them.