Munster’s Andrew Smith ruled out for a month 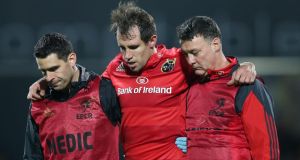 Munster will have to plan their escape from their Champions Cup pool without Australian Andrew Smith after the centre was ruled out of action for the next four to six weeks.

Smith had surgery on his left knee last week after injuring himself in the first of back-to-back defeats to Clermont and will now miss both of Munster’s remaining Champions Cup games.

Smith will also miss Friday’s inter-provincial derby with Leinster at Thomond Park and the New Year’s Day clash with Connacht, but according to Anthony Foley, skipper Peter O’Mahony is also a worry with the knee injury that saw him limp out of their defeat in Glasgow.

“Yeah he’s up in national camp. I spoke to him last night and he had his scan and he’s fine. He got a bang on the knee. He got that before half-time when Robin scored but played five or six minutes, didn’t feel comfortable so we took him off,” Foley said.

It’s four years since Munster lost four games in a row, but the prospect of their fourth home defeat in just eight Thomond Park outings must worry Foley.

The fact that arch rivals Leinster could be the side to inflict that unwanted tag has not gone unnoticed either as the Munster players took part in a double session at University of Limerick without all of the Irish squad members.

Also absent from training was hooker Duncan Casey, who was present at the Ireland get together in Dublin. Casey has recuperated from a sinus problem and should be ready to face Leinster on St Stephen’s Day.

It remains to be seen which of Foley’s international players will be released to play. Paul O’Connell, O’Mahony, Conor Murray and Simon Zebo started in Glasgow after playing back-to-back games in Europe, while Felix Jones had to be introduced just four minutes in after Johne Murphy suffered a head injury.

“We’ll get some back, we’ll see how fellas have reacted after the weekend. There might be one or two of them (ruled out) we just need to check on the injuries,” Foley said.

Munster also moved to debunk a report in yesterday’s L’Equipe that JJ Hanrahan was on his way to Stade Francais.

Foley said he knew nothing of the rumours until just before he spoke to the media, but a Munster spokesman said the Stade Francais president Thomas Savare visited the club on Munster’s invitation.

“I just think there is a lot of speculation around players in terms of when they are running out of contract and stuff like that,” said Foley.